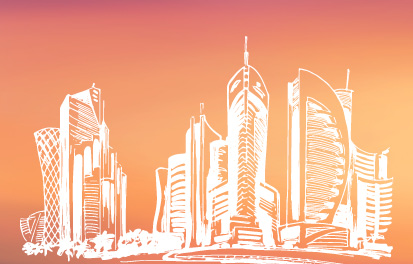 The importance of Arabic Language is not limited to the fact that it is the official language of the Arab Countries; it is the language that unifies millions of Arabic speakers, reflects their identity, culture, history, and independence. It also has significant spiritual importance to millions of Muslims reading the Arabic verses of the Holy Quran.

Understanding the importance of Arabic Language as an essential basis of the country’s identity and culture, while opening the market to further foreign investments and opening Qatar to the world in 2022, Qatar introduced Law No. 7 of 2019 on the Protection of Arabic Language (the ‘Arabic Language Law’).

What changed? Arabic is everywhere!

According to the Arabic Language Law, all company names must be in Arabic, except for well-known company names which should be accompanied with an Arabic name (Article 8). All trademarks must also be written in Arabic. However, it is possible to use a foreign trademark provided that the Arabic version is placed in a clear position near the original language (Article 10).

This applies to company names, shops, signboards, and products.

Non-compliance with the abovementioned provisions of the Arabic Language Law is punishable with a fine not exceeding QAR 50,000 (approximately US$13,700) (Article 11).

Does this mean that all Trademarks must only be in Arabic? Definitely not!

This is why many international trademarks are created in the language of the home country of the trademark owner, with different translations and even transliterations, reflecting the global vision and expansion objectives of the owner.

Law No 9 of 2002 on Trademarks (‘Trademarks Law’) already prohibits the registration or use of any mark which might be considered confusingly similar to a trademark that has already been registered or well-known in Qatar. The Trademarks Law also prohibits the registration of any company name identical or confusingly similar to a registered or well-known trademark. It is worth noting that company name registration in Qatar was already done in Arabic, even before the implementation of the Arabic Language Law, considering that commercial registration certificates are issued in Arabic.

The above concept is more clearly prescribed in the GCC Trademarks Law which was ratified by Qatar in 2014, and which is currently awaiting the ratification of its implementing regulation. The GCC Trademarks law prohibits the registration of any trademark that is a translation of a well-known trademark.

Does the Arabic Language Law limit the protection of Trademarks in Qatar? Not at all!

As a consequence, the above provisions offer trademark owners a further means of protecting their intellectual property and the ability to prevent the use and registration of their mark even where it is a translation or transliteration of the owner’s trademark.

What should be done by Trademarks owners? Consider a localised version of their Trademarks in Arabic!

A trademark in a foreign language could have a number of different translations in Arabic because of the rich nature of the Arabic Language and its extensive vocabulary. As a result, a trademark owner may consider many translation options depending on the intended meaning and intensity of the word in question.

For example, the word ’friend’ may be translated into Arabic using 13 difference nouns depending on the degree of friendship; at least two of those nouns are nowadays commonly used in Arabic as synonyms.

The transliteration of a foreign trademark in Arabic could also be done in more than one way, considering the pronunciation of Arabic Letters, the use of vowels for long sounds, and marks for short sounds, unlike the English language.

For example, the letters ‘P’ and ‘B’ would be replaced by the same letter in Arabic, due to the absence of a letter reflecting the sound ’P’. While the word ‘kid’ could be written in Arabic using two letters reflecting ‘k’ and ‘d’ letter sounds without the use of any vowels.

Registering the Arabic localised version before the Trademark Office, even if not mandatory, would protect the correct Arabic spelling of the trademark based on the owner’s view (who may need to seek professional, local advice to confirm), and whether it should be used as a translation or a transliteration. Such registration in Arabic would also expand and confirm the protection of the trademark in any other language, as it should prevent the registration and/or use of any identical or confusingly similar trademark or trade name.

Qatar is an attractive diversified market, which continues to attract further foreign investment. The introduction of the Arabic Language Law enhances trademark protection in many aspects, and provides a further legislative basis confirming a commercial practice which was implemented for practical and commercial reasons.

Creating, protecting and using a localised version of any trademark in Arabic may be used not only to comply with the Arabic Language Law in Qatar, but might also be used for commercial reasons in all the Arab countries considering the size of this market

Qatar appears to be moving in the right direction, realising the importance of foreign investment and international trade, with the aim of seeking to continue to maintain and protect its identity and culture.