The UAE Insurance Authority is now a fully fledged court 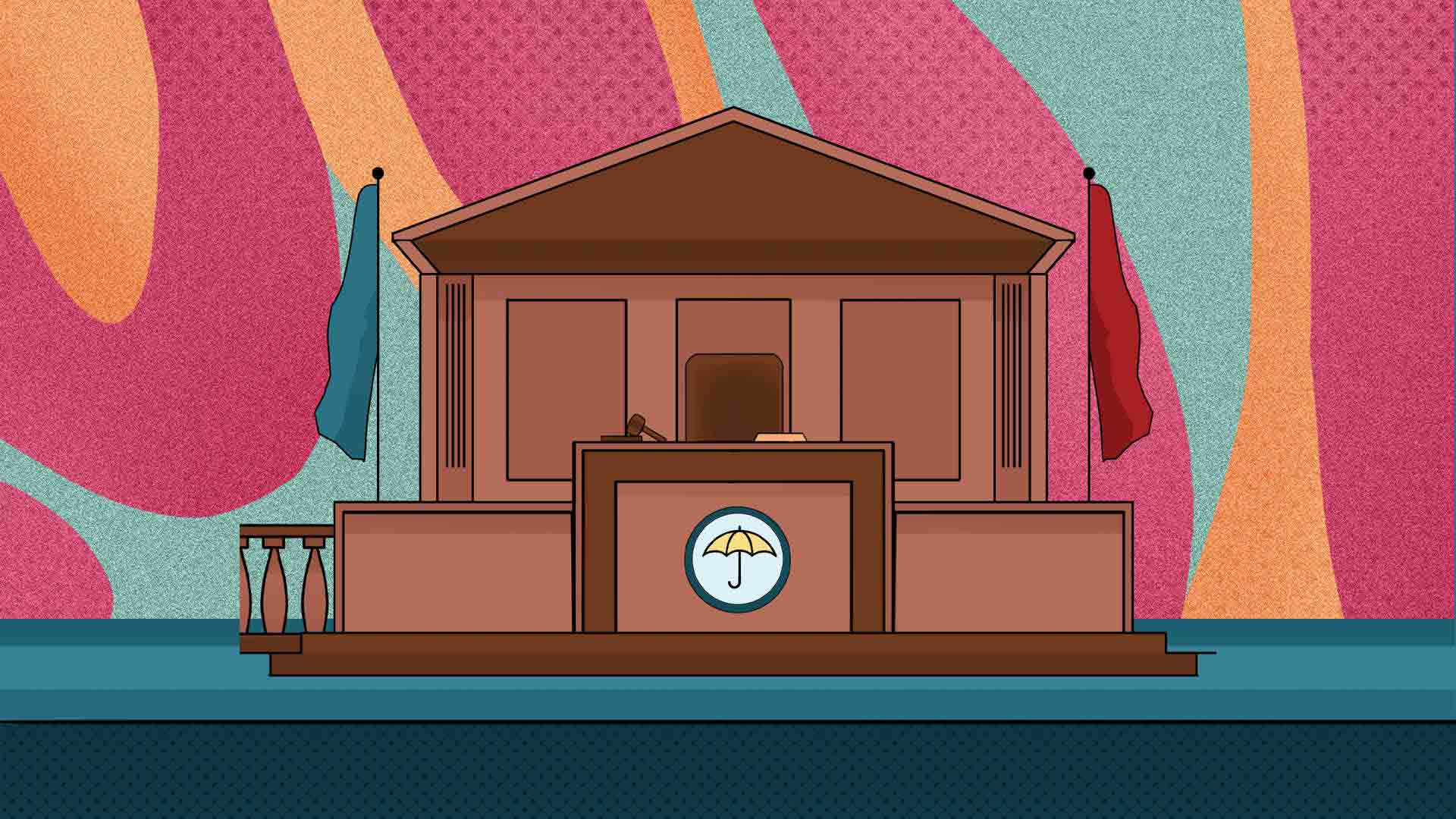 Following our article of September 2019 in which we discussed the amendments introduced to the processing of insurance claims in the UAE pursuant to the Federal Law No. 3 of 2018 amending certain provisions of Federal Law No. 6 of 2007 on the Establishment of Insurance Authority & Organization of Its Operations (’Amending Law’), as well as the Insurance Authority Board Resolution No. 33 of 2019 concerning the Regulation of the Committees Responsible for the Settlement and Resolution of Insurance Disputes (I’A Resolution No. 33’), the newly introduced dispute resolution committees at the Insurance Authority (’DR Committees’) became fully operational in end-2019.

As previously discussed, the Amending Law and the IA Resolution No. 33 provide that insurance-related claims falling under the jurisdiction of the DR Committees cannot be heard by local courts, unless such disputes have first been considered by the DR Committees.

Pursuant to the IA Board Resolution No. 34 of 2019 concerning the Appointment of the Members of the Insurance Dispute Resolution Committees ( ’IA Resolution No. 34’), which came into force in November 2019, two main committees were formed in Abu Dhabi and Dubai to resolve insurance claims that fall within the jurisdiction of the DR Committees and the said committees started to hear claims as of the end of 2019.

According to the IA Resolution No. 34, there is one main committee and one substitute committee appointed for each Emirate, for a one-year period. These committees consist of three members: a judge delegated by the Dubai/Abu Dhabi courts and two members from the Insurance Authority (IA).

New amendments to the jurisdiction of the DR Committees

Initially, pursuant to Article 4 of the IA Resolution No. 33, the DR Committee(s) had jurisdiction to consider insurance disputes of all classes and types arising from complaints made by an insured, beneficiary or an affected person who has a right to bring a dispute against an insurance company licensed in the UAE.

While the IA Resolution No. 33 provided a wide definition for the ‘Beneficiary’ who may initiate a claim before the DR Committees, which included any assignee to whom the insurance benefits have been legally transferred, now pursuant to the IA Resolution No. 9, the said definition has been amended whereby it has been limited to the original beneficiary named under the policy. This amendment effectively excludes from the jurisdiction of the DR Committees, any claims from assignees against insurers. For example, in a scenario where a bank had, by way of security, obtained an assignment from the original beneficiary under the insurance policy and the insured risk occurred, the bank would not be entitled to resort to the DR Committees in case of any claim against the insurer. The bank should instead file its claim directly before the competent courts.

Since early 2020, Al Tamimi has acted on a number of complaints before the DR Committees. As noted in our previous article, the DR Committees have been granted extensive powers and authorities similar to those exercised by the local courts, such as hearing witnesses, appointing experts, and awarding costs. However, in practice and from our experience with the DR Committees so far, it appears that the claim process before IA and the DR Committees operates as follows: 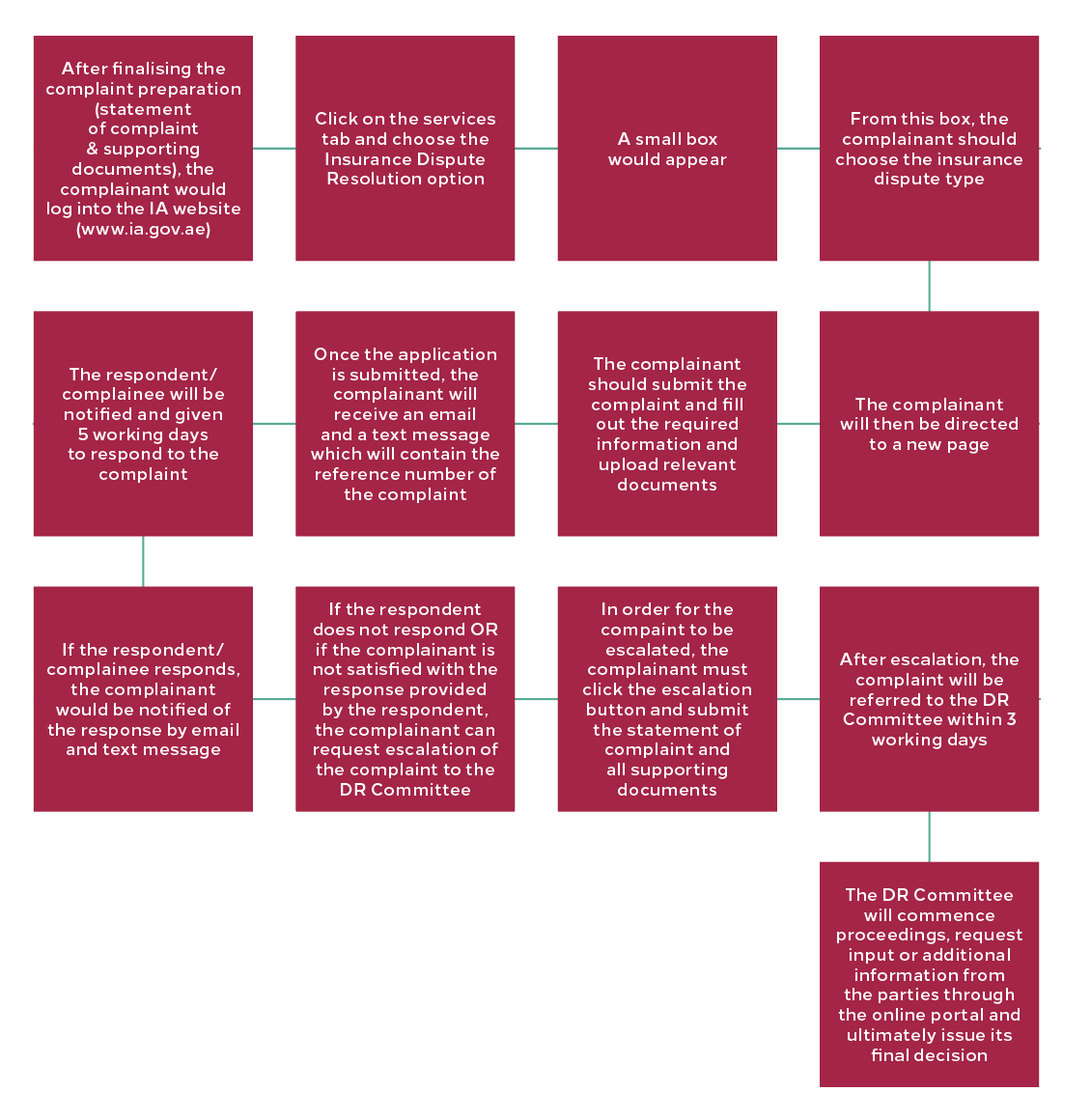 It is to be noted that all complaints made to the IA should be registered exclusively through the IA’s online portal. The complainant may register the complaint by itself or via its legal representatives (currently there are no filing fees). Also, all exchanges and submissions are done exclusively through the IA portal where the complaint can be accessed by entering the registered mobile number and the one-time password provided by the IA via email and text message.

Escalation to the DR Committee(s)

Thus far, the Dispute Resolution process before the IA and DR Committee appears to be relatively fast and limited to exchanging a couple of submissions through the IA portal after which a decision can be expected within approximately one to three months from the date a complaint is filed on the IA’s portal.

Decisions handed down by the DR Committees

Al Tamimi had represented a local bank before the IA in a complaint filed in May 2020 against an insurance company. The complaint pertains to claim made under a comprehensive crime and professional indemnity insurance policy. The claim amount was approximately AED 22 Million (approximately US$6 million). The insurance company defended the claim on the premise that the claim falls under one of the policy exclusion clauses and that the insurer had ceded 100 per cent of the risk insured to reinsurers, who also rejected the claim on the ground that the claim falls under the exclusions of the reinsurance treaty.

In July 2020, the Dubai DR Committee issued its final decision, ordering the insurance company to pay the bank an indemnity amount of approximately AED 18.5 Million (approximately US$5 million) in addition to legal interest at the rate of nine per cent from the date the decision becomes final.

In another complaint, the Dubai DR Committee handed down a decision in a complaint made under a credit insurance policy whereby it decided to reject the complaint based on time prescription.

These decisions signify that the DR Committees are receptive to hearing not only the technical and substantive issues but also the strict legal challenges and pleas raised by the disputing parties.

As noted in our previous article, decisions issued by DR Committees may be challenged by the concerned party before the competent Court of First Instance within a period of 30 days from the following day on which the party was notified of the decision. If the decision is not challenged within the said time-frame, the decision will be considered final and enforceable.

The procedures and mechanism of the dispute resolution process has become a much more simplified process as the complaint is registered easily through the IA’s portal, and a decision is issued within a relatively short period of time. Issues such as the claim notification procedures, attending court hearings, and the high costs involved are not expected to be concerns of a complainant before the DR Committees.

Another advantage of the DR Committee is its composition of a judge and two members of the IA; this combines legal and technical expertise when considering insurance claims. Thus, we expect that insurance experts will not be relied on as often as before, which enables decisions to be issued quicker than before.