The Development of Rail Infrastructure Projects in the GCC 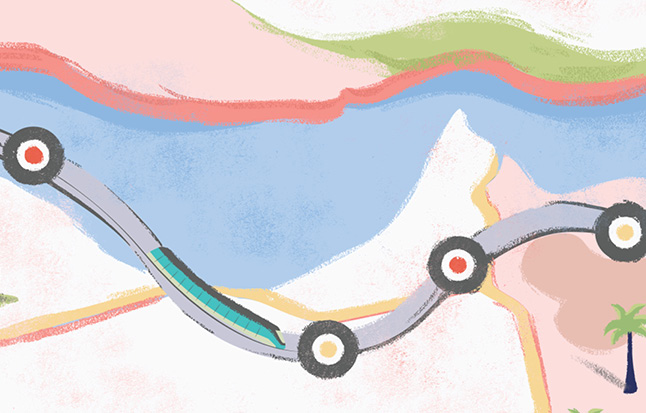 The rail sector in the Gulf Cooperation Council (‘GCC’) is rapidly evolving. In recent years member states have gradually realised the importance of developing this aspect of the region’s infrastructure and the key role the rail industry can play in the diversification of economies, in facilitating GDP growth and providing a more environmentally friendly and sustainable alternative method of ground transportation.

As of 2017, there was estimated to be over 1,300 active transportation projects in the GCC spanning the four key transportation sectors (rail, road, aviation and maritime), with a total project value of nearly US$ 380 billion. A significant proportion of this investment has since gone towards developing the GCC’s rail infrastructure, most notably a GCC-wide development initiative known as the GCC Railway Project. With an estimated cost of over US$ 240 billion, the GCC Railway Project is set to be one of the largest contemporary cross-border rail networks in the world, linking key cities within each of the GCC nations of the United Arab Emirates, Saudi Arabia, Kuwait, Bahrain and Oman, into an integrated, pan-Arabian route of over 2,117 km. Originally tabled for completion in 2018, it is now expected to be completed in 2021.

A number of other rail projects are either ongoing or planned for the region, further reaffirming the heightened regional focus on developing this sector. Saudi Arabia, for example, has embodied its strategy for rail infrastructure development within the Saudi Vision 2030 plan, a key feature of its ambitious policy to help diversify the Saudi economy. The Riyadh Metro project (owned by the Arriyadh Development Authority), a US$ 23 billion scheme consisting of six lines totalling 176km and 85 metro stations, is set to be a key part of the Kingdom’s transportation network once completed. Currently in the testing phase, the Riyadh Metro is due to become fully operational in 2021 at which point it is expected to transport 3.6 million passengers per day. The Saudi Railway Company has also announced plans to construct a 960km railway line between Jeddah and Riyadh as well as a 340km railway linking the industrial cities of Yanbu and Jeddah.

The construction of the Jeddah-Riyadh rail link will cut the time needed to travel between the two cities from the 10 to 12 hours currently required to do so by bus, to six hours. It is also forecast to carry up to eight million tonnes of freight per year. It is scheduled for completion in 2023.

In the UAE, the Government of Dubai’s Roads and Transport Authority is in the process of extending the existing metro network which could see the addition of at least four new stations. Etihad Rail are also embarking on Phase 2 of their country-wide rail network project which will see 1200km of track laid across the UAE which will connect the main emirates of the UAE and which will help facilitate the creation of a faster and more environmentally efficient method of transporting passengers and freight between the emirates. And in Oman, Oman Rail is examining the feasibility of a 375km train line to transport minerals from mining hubs to the port town of Duqm.
In this article we will briefly examine some of the more commonly-used procurement arrangements for this form of infrastructure project, highlight the challenges often faced during the project life cycle, and explain some of the potential long term benefits.

There are various procurement methods available to developers operating in the rail sector. The most suitable approach will depend upon a range of variables including the nature, scale and complexity of the works to be undertaken, the amount and availability of funding, the risk appetite of the parties, as well as other technical, commercial and legal factors. The main contractual models which can be adopted are design-and-build, construct-only, and turnkey solutions. Additionally, large-scale transport projects frequently lend themselves to PPP-type agreements (particularly if there is a desire to construct and operate the project through the use of private sector investment as well as private sector expertise).

The Risks and Challenges

Unsurprisingly, there are a number of risks and challenges when embarking on infrastructure projects of this nature. There is a delicate interplay of issues that needs to be evaluated and reconciled, including construction and engineering risks (linked to the design, engineering and technical complexity of the project), financial risks (such as cost overruns and securing third party funding), social risks (public perceptions regarding the project as well as the need to address the perceived negative impact such developments may have on local communities) and political risks (such as policy and regulatory uncertainties and changes some of which arise from the apparent lack of clear regulatory frameworks applicable to the governance of these types of projects). Additionally, the patronage risk needs to be carefully evaluated and it is imperative that detailed feasibility studies are undertaken to ensure that the project is financially viable. If not properly assessed, managed and monitored these issues can potentially cause delays to the completion of the project, can result in further cost overruns and regulatory infringements. There can also be significant complications when obtaining stakeholder consents for the proposed routes.

Lack of adequate risk management at all stages of the value chain and throughout the life cycle of a rail project is a common issue, largely as a result of poor risk assessment and contractual risk allocation during the concept and design phases of a project as well as poor drafting of the underlying construction and other commercial agreements which may not accurately reflect the legal and commercial arrangement between the parties.

Interface risk between the contracting parties and key third parties/stakeholders (such as other contractors, existing rail operators and users) in addition to the interface risk associated with the assets involved in the project, for example with respect to the rail equipment, track and materials to be used, means that potential issues need to be identified and assessed early in the project’s development with a strategy advanced in order to manage such risks before they consume or overshadow the progress of a project.

Furthermore, the parties must ensure such issues are adequately addressed in the underlying contract, for example by identifying interface issues with existing properties, infrastructure and utilities. This may also be undertaken by ensuring, amongst other things, that the contract contains adequate collaboration and co-operation provisions as well as clear design and specification obligations. Alternatively, a separate project specific interface agreement may be agreed alongside the construction contract in order to add clarity in this respect.

The design of a project is obviously an integral factor as to whether or not it will be a success, fit for its intended purpose and thus able to operate safely and in accordance with the required parameters. It is therefore imperative that a professional team, of engineers, design consultants and contractors with industry specific knowledge and experience of working in the rail sector, are engaged. This will help reduce the likelihood of issues arising later in the project. In this regard, it is imperative that design nuances between different jurisdictions are fully addressed if a rail project is to span different countries to ensure the seamless operation of the project.

Not possessing the required licences, permits and consents can also have a significant impact upon the programme of a project. Proper attention should therefore be given to obtaining the required development consents through ensuring early consultant and contractor involvement in the planning and application process. This should include identifying any property owners that may be impacted by the works in order to obtain the required consents. This is vital to ensure that the route of the network can be confirmed.

Despite the many challenges and complexities associated with developing rail projects, there are also potentially a number of far-reaching, long-term benefits.

One obvious benefit of developing the rail infrastructure is that enhanced railway links enable individuals, goods and services to be transported more easily and effectively both within and between GCC states. More efficient and cost effective transport for people, goods and services will contribute to developing tourism and commerce in the region as well as help enhance employment opportunities for those living in areas where such rail links are located, by allowing them to explore opportunities beyond the area in which they live.

The primary mode of freight transport is currently by vehicle, which can be slow, inefficient and expensive, as well as more detrimental to the environment. Use of rail will enable greater volumes of goods to be transported within a shorter period of time, and at less cost, facilitating more efficient trade. Railway hubs will require staff to operate and maintain the facilities. There will also be a need to service both staff working at and passengers travelling to, from and through such transport intersections, creating employment, retail and other investment opportunities.

Developing rail transport in underdeveloped areas can act as a catalyst for regeneration, for example by connecting urban hubs with remote rural parts of the country in which they operate. If planners can ensure that they inter-connect these regions with other transport services, such as airports, ports and other local transport infrastructure, this can help encourage inward investment and economic growth in such areas.

The environmental benefits must also not be overlooked. Whereas presently the majority of passengers and freight are transported within and between GCC states by either road or air, rail investment will eventually enable a greater volume of people and goods to be transported in a single journey, reducing the amount of heavy vehicle traffic on roads and in the air and therefore lowering the average carbon footprint per journey.

Developing railway infrastructure is back on the agenda of governments across the Gulf. There is a healthy and encouraging portfolio of ongoing and pipeline projects which, once completed, will have potentially significant and far-reaching consequences for individuals and commerce throughout the region. Yet the true measure of success will only really be quantified not solely by reference to contractual milestones and economic indicators but by the projects’ social impact and the positive legacy they can leave for generations to come.