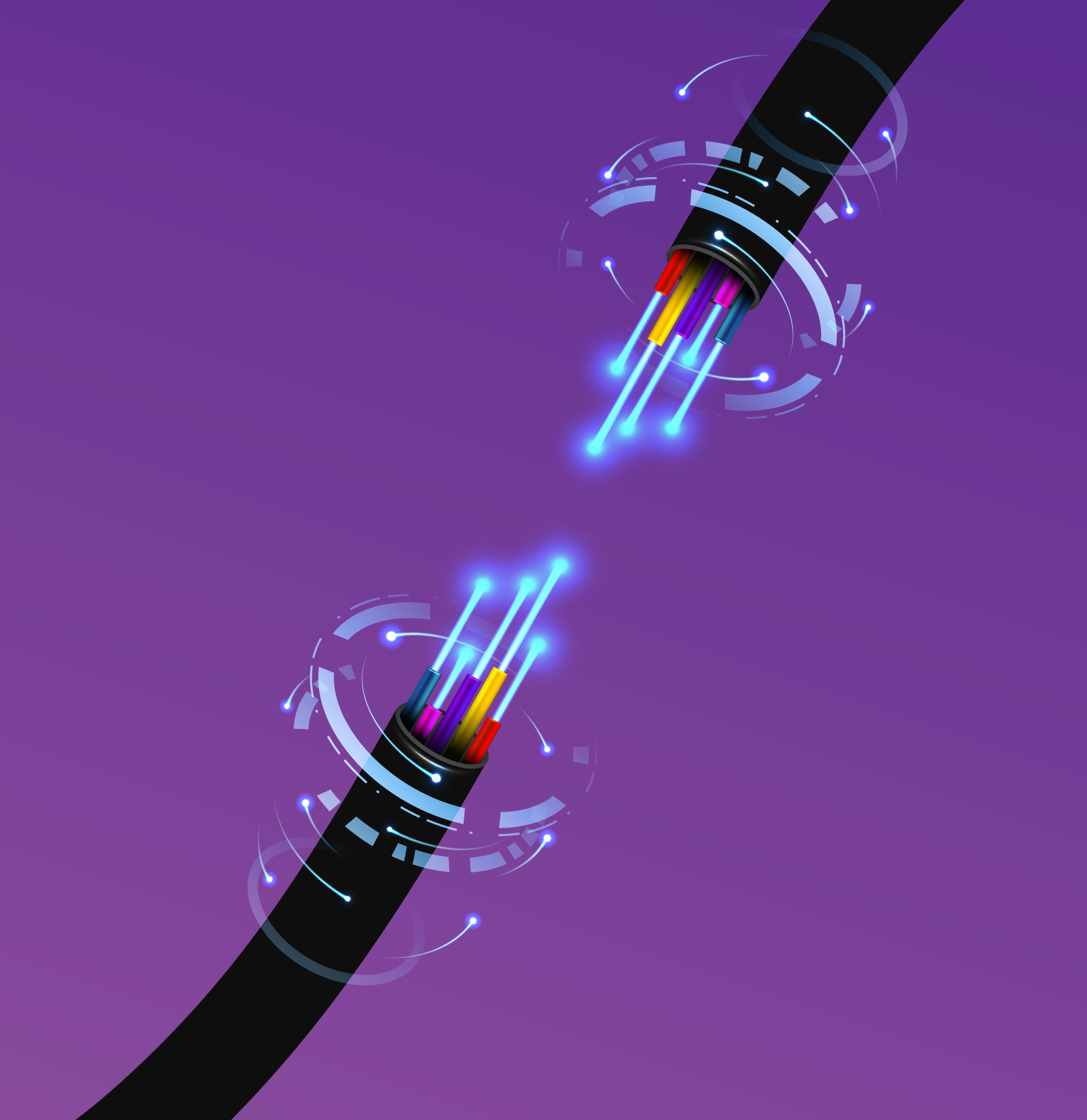 Submarine (subsea) cables snake around the Gulf, from southern Iraq, heading to India and onto Asia and around Oman, into the Red Sea and out across Egypt into the Mediterranean and to Europe and beyond, carrying voice and data traffic. A web of subsea cables cross back and forth across the Indian Ocean and link east Africa to the Gulf. These fibre optic routes form the Internet’s backbone. Over 95 percent of the world’s internet traffic runs over subsea cables and as internet traffic continues to expand, these cable systems will become greater in number and increasingly critical for the global (and regional Middle East) economy. Much of today’s growth is being driven by the infrastructure needs of the Over-The-Top (‘OTT’) providers; both the internet powerhouses like Google and Facebook and the giant cloud computing providers like Microsoft and Amazon. As technology develops, these cable systems will be able to carry more and more capacity.

Cable systems are long term projects. They are built to operate for years (and must do so to pay back the capital expenditure in building them). The initial build – laying the subsea cable and installing the equipment that runs the cable systems – is a challenging and expensive undertaking. It involves long tender processes and negotiation before it even gets to delivery and installation.
As capacity demands increase, and as technology changes, there are multiple upgrades to the equipment that run the cable systems over time, usually every few years. These are also expensive projects and usually (but not always) involve tender processes (and more negotiation). Increasingly, as telecommunications networks that used to be largely hardware based become software based (with the introduction of network function virtualisation software and software defined networking), software changes are as important as hardware developments.

One of the reasons we are seeing a growth in individual operator owned cable systems is to enable greater speed to market. Consortiums, by their nature, take more time to make decisions. This reduces agility in a highly competitive space where customer demand for connectivity and bandwidth continues to multiply rapidly.

For the reasons set out above, contracting for cable systems is not a quick and easy business. Cable systems reflect a huge investment, whether for a consortium or for a single operator, and are critical to business. As a result, the cable system supply contracts come with a number of key features you may not find in other technology contracts as well as contract terms that are common across commercial contracts but that take on much greater importance due to the criticality of a cable system build or upgrade.

Cable system supply contracts are usually turnkey in nature, whether covering the initial build or any upgrade. A single vendor is identified that can deliver an end-to-end solution. The vendor is responsible for managing the whole process. This is easier said than done. Cable systems cover multiple jurisdictions, often challenging ones in which to do business. Vendors may need to manage multiple sub-contractors to deliver the solution. There is also the added complication of sourcing the permits, licences, etc., necessary to build the cable system in each of the countries where the cable system lands. These permits come in many different forms, covering importation, landing, site access, etc. The parties need to be clear who is responsible for securing the required permits, licences, etc., particularly where there are multiple customers making up large consortiums. The customer will want the vendor to secure all the permits. The vendor will want the customer (or certain consortium customers) to secure specific permits (e.g. landing permits). As a minimum, the vendor will need customer support to secure any such permits, licences, etc.

These contracts include very detailed solution specifications. Vendors want to make sure that they have captured all the elements of the solution within the price offered (with any out of scope elements coming at additional cost). Customers want to ensure that the vendors will deliver the solution, including anything incidental or necessary to the delivery of the solution, without any price increases. Customers do not want to be dragged into multiple change requests and increased cost. This can lead to time consuming negotiation on the solution terms.

Vendors also want to build in the ability to survey the landing stations at which the cable systems will land. Vendors will have done some initial due diligence as part of the tender process and will have priced accordingly. Usually this will have been a desktop exercise. This needs to be validated on the ground. Often vendors will find that some landing stations have not been built. Some may lack power or the right environmental conditions. For the initial builds involving the laying of the cable, marine surveys are required to confirm route positions. This surveying often leads to expensive re-routing where the undersea conditions prevent the original route being followed. Customers want to lock in the vendors to their tender pricing and avoid a re-pricing based on surveys, after awarding the tender. Customers want the vendors to take the risk that their assessment, at tender stage, was inaccurate. This is particularly critical where customers have fixed budgets applied to the project. It becomes particularly complicated in consortium cable systems where consortium members have agreed to contribute a percentage amount of the price. Sometimes, vendors can get customers to agree to price changes based on the surveying, subject to an agreed cap. Key for customers is not to allow any additional surveying to waste too much time.

Time is of the essence. Customers are waiting for the cable systems to be installed to start selling services over the cable systems (or upgraded to start selling the additional services provided). As a result, customers will push the vendor to deliver as quickly as possible and allocate liquidated damages for any delay to incentivise velocity. Vendors will seek to mitigate any such financial risk: lengthening delivery timelines, building in risk premiums or applying multiple exclusions and customer dependencies. The responsibility matrix covering the division of responsibility between customer(s) and vendor can be a key document which the parties will spend a great deal of time building and negotiating.

Due to the technical complexity and business criticality of the cable systems, customers are looking for long warranty periods and even longer guarantees that the cable systems will last for a certain period of time. This is a called the ‘design life’ and this can sometimes last up to 25 years. Customers want the certainty that their cable system shall continue to function long enough for the customers to reclaim their capital expenditure and to have access to the right technology (including spare parts) for a long time. Vendors will want to make it clear that the cable system, in its entirety, will last for a long period of time but the constituent parts may change over time.

Customers will also want the level of support to be as broad and comprehensive as possible to ensure vendors are required to fix whatever needs fixing for as long a period of time as possible. Vendors, on the other hand, will want to scope the support as tightly and accurately as possible based on how they have costed the support (and for how long).

Force majeure provisions will also need to be carefully considered as these act to limit a vendor’s risk in certain, clearly stated, circumstances. This is an extremely important provision in a cable system contract. Vendors will want the force majeure provision to cover bad weather that can often affect the initial cable laying. They will want to use it to cover delays with government permits or to manage third party cable cuts that take time to fix. A key discussion between customers and vendors is redundancy and resilience. Customers can build this into the design of a cable system to mitigate down time (particularly if there is a cable cut). This, though, comes with an additional cost and customers will often strip this out to save money. Vendors need to ensure that the service level agreements (and service credits) reflect any customer decision not to build in a level of redundancy or resilience.

In addition to the potential financial exposure to delay liquidated damages and service credits, vendors often face the requirement for large performance guarantees demanded by customers to protect their investments prior to acceptance (and sometimes through the warranty periods). This is particularly common in the Middle East. These guarantees pose a huge financial liability for vendors, both in relation to the cost of issuing and maintaining the guarantees and the financial consequences to the vendor’s balance sheet of issuing such a guarantee, which can often be claimed, on an ‘on-demand’ basis by the customers. Vendors will fight to reduce the size of the guarantee and the length of time they need to stay issued. The guarantee language is, not unsurprisingly, heavily negotiated and vendors move quickly once the conditions for maintaining the guarantee are met to have the guarantee released.

Customers are increasingly looking for flexibility. They do not want to be reliant on a single vendor and that vendor’s technology. Vendor lock-in needs to be avoided. It prevents customers moving to a new vendor for particular equipment for price savings and for technological benefits. Previously, ‘rip and replace’ deals have been favoured where a new vendor replaces the old vendor and swaps out all the old vendor’s equipment. This just replaces vendor lock-in with the old vendor with vendor lock-in with the new vendor. As a result, the customers are increasingly requiring ‘open systems’ allowing customers to swap in and out different technology with minimal impact on warranties, service level agreements, etc. This is particularly important as customers look to introduce software to drive network efficiency and performance.

Last, but certainly not least, customers want to make sure the cable system works before they pay for it. There are detailed acceptance procedures covering the stages of the cable system finishing with the acceptance of the complete cable system, tested end to end. A full cable system build can take a long time, especially if acceptance is delayed. Vendors want to be paid on specific milestones to defray their costs, which based on the cost of the cable system are substantial and are carried over the long build periods. Vendors are often looking for payment for the equipment in advance with the payments for the services needed to install the cable systems backended. This can be a key point for negotiation. If customers are willing to pay for equipment in advance, they will often want vendors to issue payment guarantees covering the initial financial outlay (in addition to the performance guarantees discussed above). These advance payment guarantees can often be sizeable. Once again, this is particularly common in the Middle East. Customers will want to defer certain payments, post-acceptance, for as long as possible to ensure that the cable system is working and delivering what the customers need.

Cable systems will continue to be built to cover key geographical routes and expand capacity on those systems as internet usage continues to grow. More cable systems will be built in geographies that are yet to experience the internet growth other parts of the world have. Africa is a good example and there are already cable systems traversing the west and east coasts of Africa with more to come, such as the new Africa-1 cable system.

Even more interesting still, as cable systems become more and more critical to the health of the Middle East economy, more of these systems will be designated as critical national infrastructure with a greater focus on cable system security and increased scrutiny of vendors.