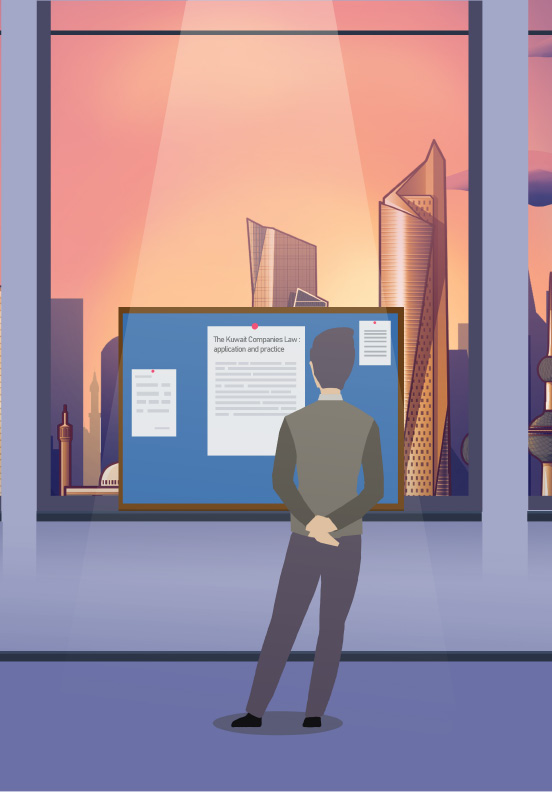 On the 1 February 2016, Kuwait issued Law No. 1 of 2016 Promulgating the Companies Law (‘Companies Law’) amending the previous law No. 25 for the year 2012. The new Companies Law is aimed at providing a more practical view compared to the previous companies’ law. Since the issuance of the Companies Law, we have tested the application of its provisions from a practical perspective while dealing with the relevant ministries and governmental institutions.

Some argue that the Companies Law reforms outdated practices and offers investors a more attractive investment environment, and yet the practice in Kuwait sometimes does not follow a strict application of the law.

The Companies Law governs corporate entities in Kuwait, and offers details and clarifies the previous law. Further, it provides guidance and a legal footing in relation to certain matters that were previously silent, for instance, shareholders agreements. Although the current Companies Law can appear clear in many instances, Kuwait ministries occasionally follow a more ambiguous method of implementing the law. Furthermore, these methods can sometimes be at odds with what is codified in the law. Below are several examples of how the Companies Law diverges from the practical application of the same in Kuwait.

Like most companies with limited liability in various jurisdictions, each must submit its financial statements approved by a certified auditing firm on an annual basis. Article 113 of the Companies Law states that the ordinary general meeting shall not be valid unless attended by a number of partners owning more than half of the capital, and Article 114 states the matters that may be discussed during a general assembly meeting, include approving the company’s financial statements.

Although the Articles provide owners that hold more than half of the capital an opportunity to legally approve the companies financials, the Budgets Department of the Ministry of Commerce and Industry (‘MOCI’) requires the approval of all the partners in the company in relation to the financial statements. Such a divergence between the provisions of the law and its actual application may create hurdles in the operation of a company because proof of submission of the financial statements is a requirement by most of the government entities. The latter case means that a partner, holding even one per cent ownership in the company, could affect the company’s operation if that owner decides to reject the company’s financial statements.

Companies with limited liability in Kuwait must have a general manager. There are two cases mentioned in the Companies Law regarding the management of the company that, depending on the case, may contradict the implementation of the law. Article 103 of the Companies Law states that “The company shall be managed by one or more managers, to be appointed in the Company Contract from among the partners or third parties. In the event of the Company Contract does not appoint the managers, the general meeting of the partners shall appoint them”. The previous Article provides that a manager may not be named in a company’s Memorandum of Association. However, while applying via the online system of the Kuwait Business Center (a branch of the Kuwait MOCI), additional information regarding the manager must be included, otherwise the application will not be accepted.

Another potential ambiguity between the provisions of the law and the actual implementation, can be found in Article 117, which states that dismissal of the company’s manager may be agreed through a resolution at an extraordinary general assembly meeting. The article provides that, in order to dismiss a company’s manager (without the manager’s approval) those owning 75 per cent of the capital are required to issue a resolution doing so. However, the practice of MOCI, in many cases, obliges the attendance of the manager before the relevant official as well as specific documents signed by the manager in order to proceed with the amendment otherwise, the amendment may not be approved. This may lead, in some instances, to filing a claim in the relevant court in order to obtain a judgment dismissing the manager, which can cause an undue burden on the management and operations of a company.

Articles 42 and 102 of the Companies Law grant a partner in a limited liability company the power to pledge its shares. The law does not restrict a local (Kuwaiti) or foreign (non-Kuwaiti) partner from pledging its shares in favour of third parties. Although the Kuwait Ministry of Justice may approve the pledging of the local partner’s shares in favour of the foreign partner, the MOCI does not permit such a pledge to be recognised or recorded in its records. It limits the pledge of shares in favour of Kuwaiti companies or Kuwaiti individuals only. This again highlights a contradiction between the operations of various ministries as well as between what is allowed under the Companies Law and the actual practice of the relevant ministry.

Depending on the type of activity that is desired in relation to the establishment of a company in Kuwait, special approvals may be required in order to operate the business of the company. The Kuwait Companies Law addresses the registration of the limited liability company without addressing any special approvals or licenses required for setting up such entities. Article 7 of the executive regulation issued by the executive regulation No. 287 for 2016 of the Kuwait Companies Law states, “a special department shall be created at the MOCI, consisting of a sufficient number of competent officials in departments from other entities such as, Department of Real Estate Registration and Authentication, Kuwait Municipality, the Ministry of Interior, etc.”. The purpose of this department is to ensure the proper co-operation between the MOCI and other government entities. The department is tasked with ensuring the proper and efficient establishment of a company once the commercial licence has been issued. However, in some instances, other government entities refuse to grant special approvals (depending on the types of activities in question) even after a company may already have obtained a commercial licence and an executed Memorandum of Association. In this scenario, if more efficient and effective co-operation had existed between the MOCI and other relevant government departments, a licence could have been denied by the MOCI at the initial stage of applying to set up a company and prior to the commercial trading licence being issued, or the approval could be granted thereby eliminating any uncertainty in practice.

We have outlined a few examples illustrating when the practice in Kuwait ministries deviates from the codified provisions of the Companies Law. These examples are not exhaustive and we anticipate additional changes between the law and practice in the future. We note that although the Companies Law is clear in relation to certain provisions, when applied in practice the outcome can be different than what is set out in the law.

Finally, not all internal regulations or circulars within the ministries in Kuwait are shared with the public. By changing this practice and sharing these internal regulations with the public or amending the executive regulations, the public could then have been aware of the actual implementation of the law and plan accordingly. In order to solve the discrepancy between the provisions of the Companies Law and its application in practice, the amendment of the executive regulation of the Companies Law would be a welcomed first step, and would assist in modernising and ensuring the efficiency of Kuwait’s Company Law and procedures.