Stadium Naming Deals: Why Clubs and Sponsors should always Consider their Termination Rights 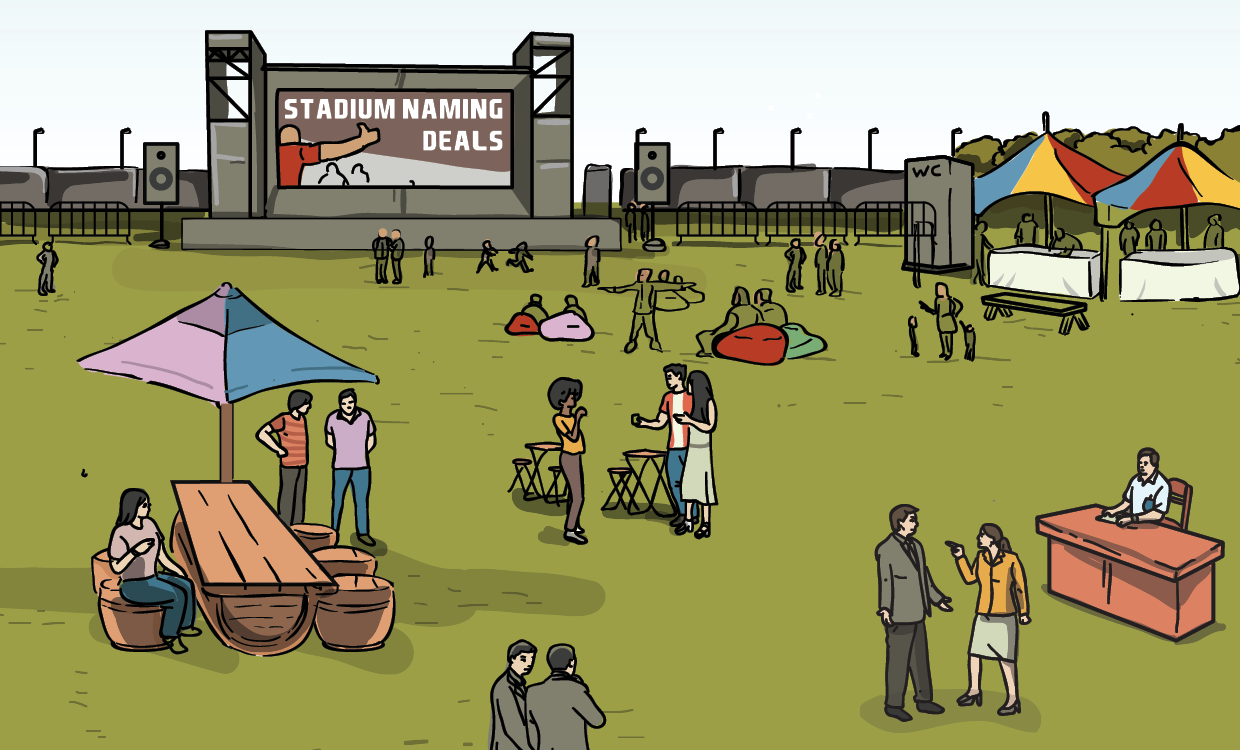 N.B. The original of this work was written for and first published on LawInSport.com (4 June 2019) and the copyright is owned by LawInSport Ltd.

Match-day at sports’ clubs stadiums is, of course, big business with the potential to generate large amounts of revenue from various streams including tickets, merchandise, concessions and sponsors. In addition, the proliferation of global connectivity and the distribution over several different types of media (broadcast, digital, streaming) means that high-profile sports clubs have the ability to attract tens of thousands of spectators from domestic and international markets.

Therefore, increasing stadium capacity and stadium design, either by an expansion and redevelopment of a current stadium or the development of a new stadium, optimises these valuable revenue streams.

A stadium also provides an opportunity for a club to monetise its stadium’s name by entering into a naming rights sponsorship deal, with big international companies and brands – already alive to the demographic appeal of the sports sector – keen to affiliate themselves with a high-profile sports team.

Under these sponsorship arrangements, the club is contractually obliged to name its stadium with the title sponsor’s name, for example, in the English Premier League (‘EPL’), Arsenal Football Club’s stadium is called the Emirates and Manchester City F.C. play at the Etihad stadium. In the media and market, the title sponsor becomes synonymous with the club and recognised as part of the club’s fabric.

Stadium naming rights’ partners are extremely attractive for a club (and venue) to supplement revenues needed to cover increasing expenses such as players’ high salaries, transfer fees and to service commercial loans and other construction costs and expenses.

For the title sponsor, a close affiliation with a globally supported high-profile club (or venue) creates valuable brand awareness, and the arrangements are typically long-term (and high-value) in order for the sponsor’s relationship and association with the stadium and club to become sufficiently entrenched to gain maximum value and exposure in the global market.

The History of Stadium Naming Rights

The history of naming stadiums can be traced back to the early 1900s in the USA, when in 1912 the Boston Red Sox Fenway Park is said to have been connected by name to its owner’s property company which was called Fenway Realty. Wrigley Field, home of the Chicago Cubs, was named after the Wrigley Brothers chewing gum company in 1926. Examples of other high-profile venues with international banks as title sponsors include Citi Field, home of the New York Mets, and Barclays Center, home of the Brooklyn Nets and New York Islanders.

In 2017, it was reported that the current highest value naming rights deal had been agreed in relation to the Scotiabank Arena, home of, amongst others, the iconic Toronto Maple Leafs. It has been reported that the deal with Scotiabank is worth USD $800 Million over a 20-year period.

In Dubai, the recently opened Coca-Cola Dubai Arena demonstrates the trend that, aside from sports clubs, naming rights are valued for multi-purpose use events venues and that naming rights partnerships really are a global affair.

However, the [re]naming and [re]branding of a stadium is a complex and costly process and, therefore, naming rights agreements are generally long-term contracts, under which the club, or stadium owner, is likely to benefit from a significant, and reliable, revenue stream. On the other hand, the sponsorship benefits for the naming rights’ partner, whilst heavily dependent upon the nature of the naming rights’ sponsors business, generally include:

What Happens if Things go Wrong?

The deal value to a club and the title sponsor is clear if the partnership lasts the distance. However, these types of long-term and high-profile arrangements create a raft of potential legal and commercial issues, and given the underlying concept of a sponsorship deal is to enhance market reputation, a key issue relates to circumstances when actions (or omissions) of one of the parties threaten to tarnish, by association, the goodwill and reputation of the other. In such circumstances, the million-dollar question is: how easily can either the club, or the sponsor, disassociate itself from the other?

There have been a number of cases in North America where clubs or venues have sought to disassociate themselves from naming rights’ partners that were subject to bankruptcy proceedings, including, the Tennessee Titans in the case of the Adelphia Coliseum, the Rams in the case of the Trans World Dome and the Houston Astros in case of Enron Field.

In March this year, the United Airlines Memorial Coliseum (formerly the LA County Memorial Coliseum) was subject to public objections, including politicians and World War 1 veteran groups raising arguments that the change of name was disrespectful and amounted to changing the fabric of a national heritage site. It will be interesting to see if the 16 year, USD $69 million naming rights’ deal is ended following public pressure.

On the other hand, could a title sponsor disassociate itself from a ‘rogue’ or reputationally damaged club or venue to avoid or limit any negative associated publicity? The reputation of a stadium or club, and by association its title sponsors, may be affected by various potential issues, examples of which could include:

Accordingly, there is potential for unforeseen events, often beyond the control of the parties, to become associated with a venue, the club and/or a sponsor, and, whilst not all events will cause medium or long-term damage, public sentiment is arguably at the very heart of brand value.

Naming rights’ agreements will provide early termination rights for both the club or the sponsor upon certain events occurring.

Upon the occurrence of a specified event(s), the party wishing to terminate the agreement will, typically, need to serve a notice to terminate, and grant the other party a period in which to remedy the position, if possible. The termination provisions should deal with who pays the cost for rebranding the stadium, which should be set out in the terms of the contract.

Typical termination events include a failure of the sponsor to pay its sponsorship fees, the bankruptcy of a party or a failure to comply with a material provision of the agreement. In the Kiel Center St. Louis Blues’ naming rights agreement, the sponsor, Savvis, had a right to terminate the agreement if the club did not play their home games at the stadium.

The concept of termination for events which may be reputationally damaging are particularly sensitive. Whilst strict ‘morality clauses’ may be difficult to negotiate since they are not necessarily seen as market practice for these types of agreements, as mentioned above, the agreements should provide for an early termination event of a material or persistent breach of any of the main contractual provisions. Therefore, a breach of an undertaking or warranty not to damage the reputation of the other may fall within this category. However, relying on such a provision to terminate an agreement comes with certain risks since it can be difficult to ascertain causation for reputational damage, causing even greater scope for dispute.

The issue surrounding the former LA County Memorial Coliseum is particularly interesting, since it appears unlikely that that this agreement may be terminated unilaterally by the contracting parties in circumstances where third parties object to the rebrand.

In civil law jurisdictions, the relevant codified laws relating to contractual arrangements will also need careful consideration. In the United Arab Emirates, for example, under the UAE Civil Code, in certain circumstances, a contract may be terminated for non-performance and/or the termination of a contract may require a court order.

Moreover, to the extent that a title sponsor and club have been affiliated for a significant number of years, the name of the sponsor and the stadium will be synonymous in the public domain, with supporters and media channels alike referring to the stadium as the sponsor’s name rather than the club’s name.

Therefore, and notwithstanding a successful early termination of the contractual provisions, the disassociation between the parties may well take some time; and then there remains the question of compensation and damages.

Whilst the financial benefit for a club, and the marketing benefit for the sponsor is clear, as demonstrated above, both the sponsor and the club must be particularly careful when considering a long-term stadium naming rights’ arrangement.

Interestingly, neither of the EPL clubs Manchester United F.C. or Liverpool F.C. have entered into stadium naming rights’ agreements with title sponsors, with both clubs retaining their traditional stadium names of ‘Old Trafford’ and ‘Anfield’ respectively, which have years of history and goodwill for its worldwide fans and supporters.

On 3, April 2019, EPL football club Tottenham Hotspur (‘Spurs’) played its inaugural EPL match, against Crystal Palace F.C., at its new ‘state-of-the-art stadium, complete with retractable pitch for conversion for use for NFL games. This new 62,000-seater stadium took around two years to construct on the site of Spurs’ old White Hart Lane stadium, and the new stadium holds almost twice as many supporters as the old one. Presently, the new Spurs’ stadium does not appear to have entered into a naming rights’ arrangement with a third-party sponsor, and the new stadium is currently known simply as the ‘Tottenham Hotspur Stadium’.

Given the increase in television rights’ revenue for EPL clubs (and a comparison may be made with NFL in the USA) these clubs may be less tempted to agree upon title sponsorship arrangements, which have the potential to materially influence the club and stadia persona. A GBP £20 million per year stadium naming rights’ agreement may now not be as attractive as it was previously for these clubs, particularly given the potential long-term issues a club may have in shaking off a stadium name in the event of an unpopular or damaging event involving the sponsor.