So You Think You Can… Enforce an Arbitral Award in the Kingdom of Saudi Arabia?

Diclaimer: This article was first published on the Kluwer Arbitration Blog on 7 December 2018.

On 8 October 2018, the Ministry of Justice (the ‘MoJ’) of the Kingdom of Saudi Arabia (‘Saudi Arabia’) announced that in the last 12 months its enforcement courts received a record-breaking 257 applications for enforcement of judgments and arbitral awards rendered outside Saudi Arabia, which were appraised at SAR 3.6 billion or ‘nearly one billion dollars’. The aim of this article is to provide a brief comparative summary of the applicable legal framework and an overview of the recent figures and developments pertaining to the foreign enforcement applications in Saudi Arabia.

Saudi Arabia acceded to the Convention on the Recognition and Enforcement of Foreign Arbitral Awards (the ‘NY Convention’) in 1994. Unfortunately, the accession did not provide any relief to the level of uncertainty surrounding the recognition and enforcement of arbitral awards. In short, arbitral awards and all relevant documents still had to be translated into Arabic and submitted to the Saudi Board of Grievances (the ‘Board’). The Board would then perform a comprehensive review of the merits of the case to ensure that the award complied with Shari’ah.

The infamous case of Jadawel International (Saudi Arabia) v Emaar Property PJSC (UAE) is a good, or extreme, example of the interventionist approach adopted by the Board when conducting its review of the award. In its 2008 ICC award, the Tribunal dismissed Jadawel’s USD 1.2 billion claims and ordered Jadawel to pay Emaar’s legal costs. Upon review however, the Board reversed the award and ordered Emaar to pay more than USD 250 million to Jadawel in damages.

In 2012, Saudi Arabia replaced its 1983 Arbitration Law (the ‘Old Law’) that did not conform with modern arbitration practice with a new arbitration law, based on the UNCITRAL Model Law, by Royal Decree No. M/34 of 16 April 2012 concerning the approval of the Law of Arbitration, which came into force on 9 July 2012. In the same year, Saudi Arabia enacted a new enforcement law by the New Royal Decree No. M/53 of 30 August 2012 concerning the Execution Law (the ‘New Enforcement Law’), which came into force on 27 February 2013. The New Enforcement Law was also complemented by Executive Regulations issued pursuant to the Minister of Justice Circular No. 13/C/4892 on 28 February 2013.

It is worth noting the following provisions of the New Enforcement Law:

The New Enforcement Law provides enforcement judges with enough teeth via Articles 46 and 47 to enforce the decisions. If the award debtor fails to pay the sum owed or fails to disclose property sufficient to satisfy the award within five days of notification of the execution order, an Enforcement Judge may impose a variety of sanctions some of which include travel bans, freezing debtor’s bank accounts, ordering the disclosure and seizure of assets, and even imprisonment.

One of the areas, where exercising extreme caution is advisable is with respect to Article 11(5) of the New Enforcement Law requiring the Enforcement Judges to ensure an award does not contradict Saudi public order and Shari’ah. Apart from the obvious issue of the myriad of ways in which Shari’ah may be interpreted, the author would also like to highlight the remaining difficulties in enforcing an arbitral award that, inter alia, grants interest. It remains to be seen in what way an Enforcement Judge would treat such awards.

Arguably, the most important feature is the exceptionally fast processing of the foreign enforcement applications. Subject to any hearings and under normal circumstances, the Enforcement Judge should issue the execution order within one month of the application and, if necessary, order seizure of assets, freezing of bank accounts and so on within another one-two months depending on the circumstances of the case. 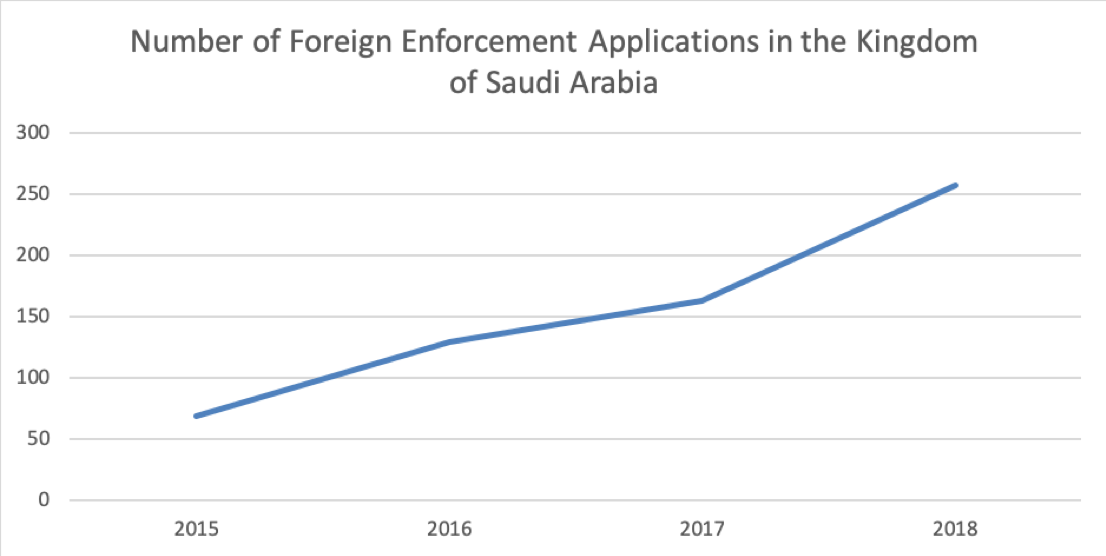 Considering the absence of any statistics on the success rate of foreign enforcement applications in Saudi Arabia’s enforcement courts, the author provides below some anecdotal enforcement examples identified mainly on the MoJ’s official website.

The first reported example of a successful recognition and enforcement of an arbitral award, pursuant to the New Enforcement Law, came from an international law firm, on 31 May 2016.

The Riyadh Enforcement Court (the ‘REC’) decided to grant the foreign enforcement application made by a UAE subsidiary of a Greek telecommunications company against a Saudi Arabian data communications service provider. The ICC award in favour of the UAE subsidiary was rendered in London. The subsidiary managed to defend approximately USD 350 million-worth of counterclaims and was awarded approximately USD 18.5 million in its favour.

The arbitral award was obtained in late 2011 and, therefore, enforcement proceedings commenced with the Board. When it became possible, the subsidiary transferred the proceedings to the REC and, three months later, the award was recognised in Saudi Arabia.

On 16 May 2018, the MoJ was informed of a successful enforcement of a judgment rendered by a court in the US state of Virginia in favour of a US company against a Saudi Arabian tourism company in the REC. The judgment value was USD 3,758,000. It is not clear how long it took the REC to consider the US company’s foreign enforcement application, but the Saudi Arabian company was ordered to pay the applicant within five days of the decision’s notification date.

On 24 May 2018, the MoJ statement produced an example of award enforcement through an order at a court in Jeddah. The court ordered a Saudi Arabian gold mining company to pay in excess of USD 10.1 million to a Chinese company thus enforcing an award issued by a ‘Chinese international arbitration tribunal’. Reportedly, the Jeddah court ordered the Saudi Arabian company to pay the award within five days of the decision’s notification date or ‘face the penalties’ under the New Enforcement Law.

On 29 May 2018, the MoJ reported a new successful enforcement of the foreign enforcement application at the REC. The REC enforced an ICC award in favour of a Malaysian company against a private Saudi Arabian university, which was ordered to pay the applicant USD 24,684,266, the award value, within five days of the decision’s notification date.

The MoJ has also cited enforcement of a foreign award ordering repayment of debts, which was issued in favour of Japanese companies against a Saudi Arabian company. Another article shared an example of enforcement proceedings relating to a foreign enforcement application incluing ‘incarcerating the owner of a Saudi Arabian establishment’ for refusing to pay approximately USD 636,000 to a Chinese company.

Establishment of the Saudi Center for Commercial Arbitration in 2016 is a prime example of Saudi Arabia’s reignited interest in resolving disputes through arbitration, which is a vital element in attracting investments and ensuring that international commerce continues to thrive in Saudi Arabia.

On the other hand, it is no less important for companies and individuals entering into business relationships with the residents and businesses in Saudi Arabia to be confident that a judgment or an arbitral award rendered by a court or a tribunal outside Saudi Arabia will be enforced effectively and expeditiously. Judging by the provisions of the New Enforcement Law, the substantial growth in the number of the foreign enforcement applications, and the (limited) positive anecdotal evidence, the author is optimistic that such confidence continues to grow and cases like Jadawel will remain a thing of the past.