MOUs: to Bind or Not to Bind?

No matter the commercial collaboration or transaction envisaged, whether it is the establishment of a school, company, appointment of a franchisee, distributor, agent, or service provider etc., it is prudent for contracting parties to agree on the high-level terms, which will form the basis of the final form agreement(s), in writing, at an early stage. Doing so assists the parties in thrashing out the key issues upfront, as well as guiding the lawyers when drafting the final form agreements. These types of preliminary documents that capture the key terms between parties, pending negotiation and agreement on the definitive agreement(s), are often referred to as letters of intent, heads of terms or memoranda of understanding (which are individually referred to below as a ‘MOU’).

A MOU is not intended to be the final agreement between the parties on the subject matter at hand, nor is it intended to contain all the relevant detailed terms of the transaction, but rather, it gives reassurance to the parties involved that there is a genuine interest, on both sides of the transaction, to collaborate exclusively in progressing matters to a stage whereby definitive final form agreement(s) can be agreed and signed between the parties. In addition, negotiation of a MOU can help identify, clarify and resolve any points of contention between the parties at the outset, which will ultimately facilitate the efficient and cost-effective negotiations of the final form agreement(s). Put simply, if the parties cannot agree on the high-level terms in a MOU, then it is, perhaps, unlikely that any proposed collaboration in relation to the contemplated transaction will materialise.

What should be in a MOU?

Think of a MOU as a foundation upon which the parties will lay the bricks forming the final form agreement(s). Depending on the subject matter of a MOU, the content will vary; however, ideally, the key substantive terms of the transaction should be set out and agreed in principle, for example, the financial terms, payment terms, duration, risk allocation, delivery terms, governing law and dispute resolution forum etc. Additionally, a MOU can also detail certain terms yet to be agreed, which can help focus and structure further negotiations between the parties, post execution of the MOU.

Before parties enter into a MOU, a decision should be made as to which provisions they want to be legally binding between themselves and which are not intended to be legally binding. It is imperative that the parties are in agreement in this regard, as any ambiguity can lead to the parties inadvertently being contractually bound to certain terms of the MOU which were still intended to be further negotiated.

Under Article 125 of the UAE Civil Transactions Code No. 5 of 1985 (as amended) (the ‘UAE Civil Code’) a contract is defined as “…the coming together of an offer made by one of the contracting parties with the acceptance of the other, together with the agreement of them both in such a manner as to determine the effect thereof on the subject matter of the contract, and from which results an obligation upon each of them with regard to that which each is bound to do for the other…”

Additionally, Article 141 of the UAE Civil Code provides that “…a contract may only be made upon the agreement of the two parties to the essential elements of the obligation, and the other lawful conditions which the parties regard as essential…” and

“…If the parties agree on the essential elements of the obligation and the remainder of the other lawful conditions which both parties regard as essential and they leave matters of detail to be agreed upon afterwards but they do not stipulate that the contract shall not be regarded as made in the event of absence of agreement upon such matters, the contract shall be deemed to have been made, and if a dispute arises as to the matters which have not been agreed upon, the judge shall adjudicate thereon in accordance with the nature of the transaction and the provisions of the law…”.

As the UAE Civil Code does not define what the “essential” elements of a contract are, there is a risk that where the parties have, in principle, agreed on a number of elements that they regard as “essential”, the parties could unintentionally find themselves legally bound to all the terms of a MOU, unless they expressly state which terms are not legally binding as between themselves.

More often than not, parties will want, at least, certain provisions of a MOU to be legally binding, but not all, hence it is important that the parties pay attention and make it clear which terms of a MOU are to be binding and which are not.

Examples of Provisions of a MOU that are Commonly Binding or Non-binding: 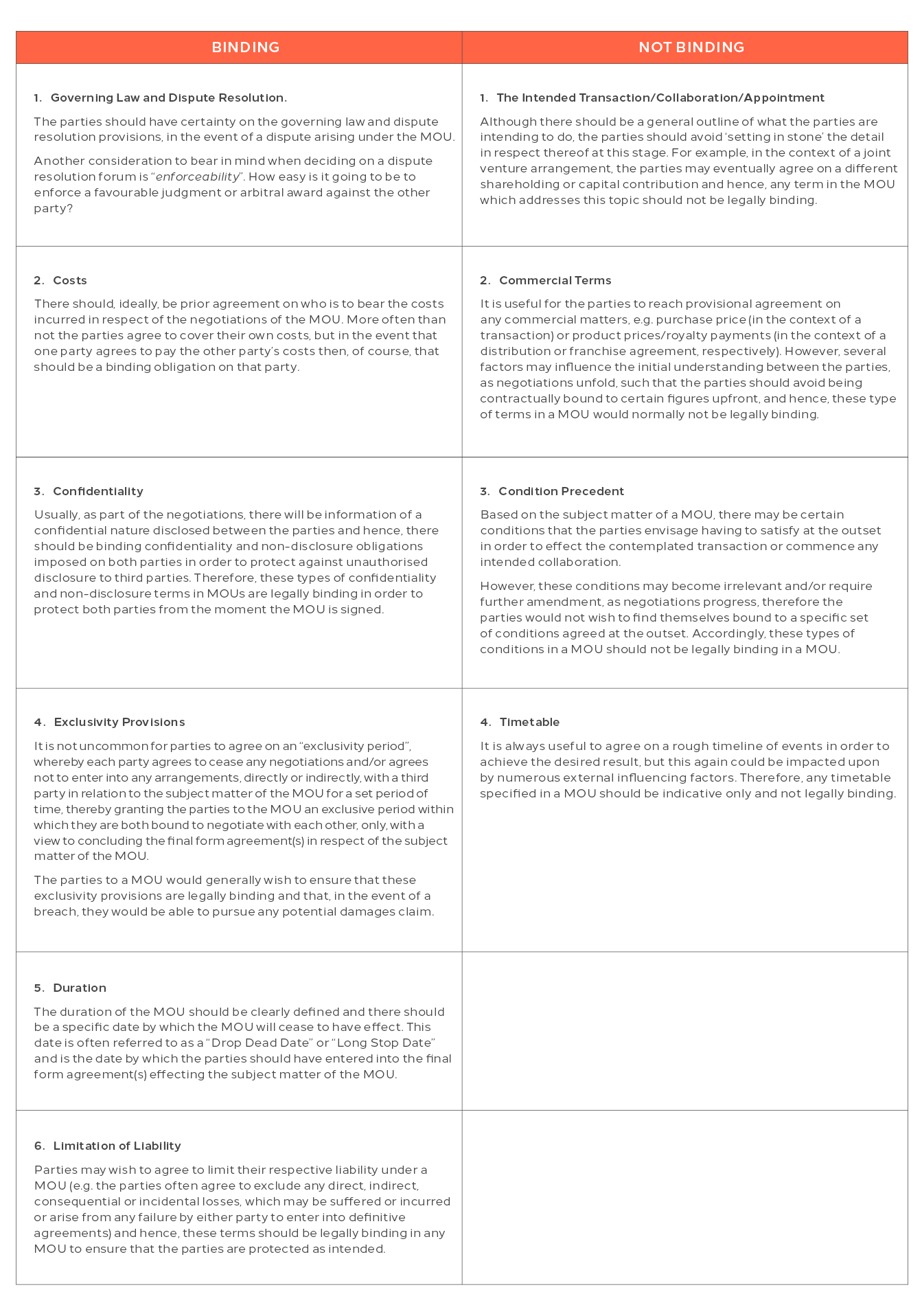 MOUs can be useful in focusing preliminary discussions between the parties, detailing the high-level terms upon which the parties have provisionally agreed and setting the framework within which the parties will collaborate in order to conclude the binding final form agreement(s).

Importantly, care should be taken to ensure that any MOU clearly records that, apart from those matters expressly agreed to be legally binding, each party regards the remaining terms of a MOU as non-binding so that the parties are able to avoid being unintentionally bound to terms which were intended to remain open for further negotiation.