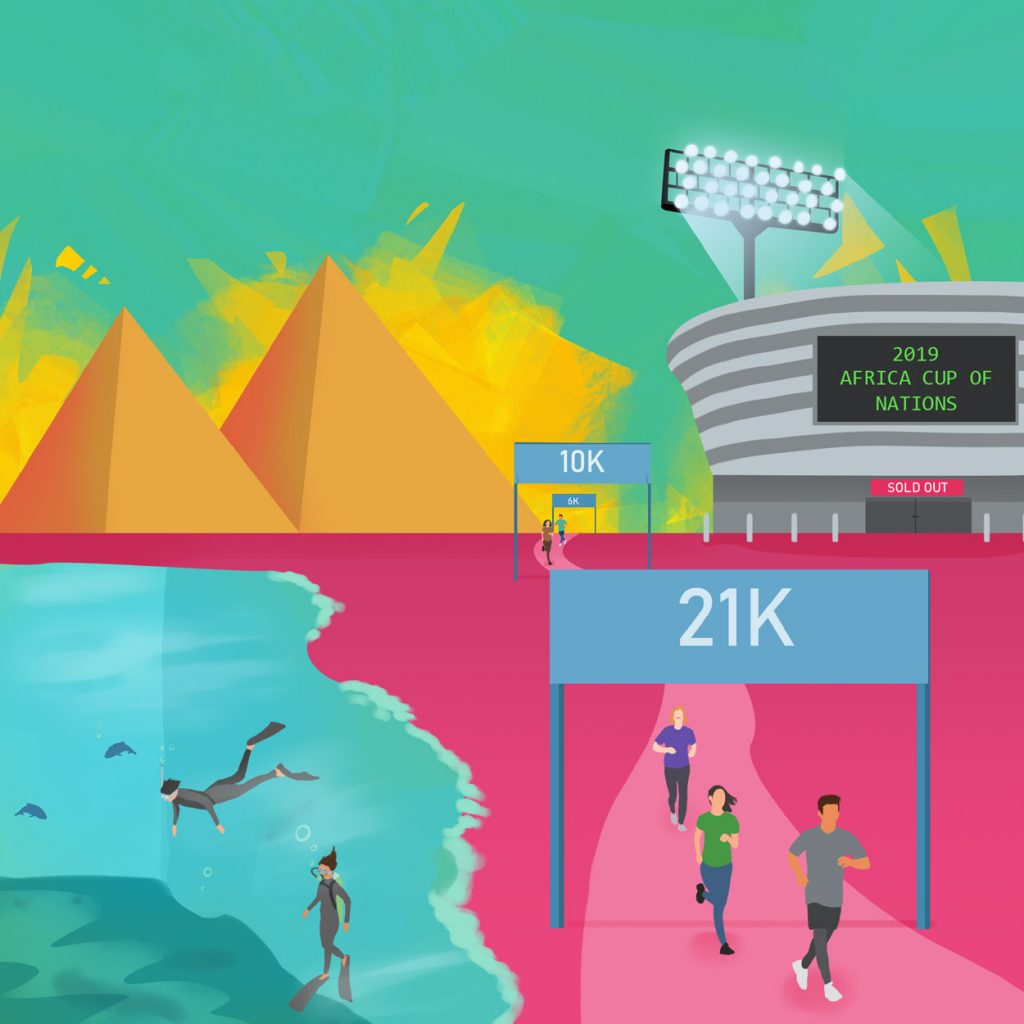 Tourism is one of the leading sources of income for Egypt and is crucial to its economy. During 2018 and 2019, tourism contributed an average of 7.2 per cent to Egypt’s Gross Domestic Product (‘GDP’) and 14.4 per cent to its foreign currency revenues. The Egyptian Government is determined to promote tourism further and increase the number of tourists through organising different events. For this reason, in recent times Egypt has targeted attracting increased numbers of tourists through organising sports events and leisure activities.

Amongst other initiatives, these efforts include hosting international sporting events such as the African Cup of Nations (‘AFCON’) which took place during the months of June and July 2019; organising marathons at historical venues; as well as developing and encouraging the growth of water sports activities at Egypt’s famous Red Sea diving spots.

The private sector also plays a significant role in promoting tourism through sports and leisure activities within the country. Private companies organise several sport leisure events such as the Sahl Hashish Endurance Festival and a number of marathons among other events. The Government encourages these initiatives and facilitates the process of organising these sporting events.

A significant step to supporting the growth of this sector was taken with the implementation of the Egyptian Sports Law issued in 2017 (the ‘Sports Law’). The Sports Law regulates sports activities in Egypt including, but not limited to, adopting measures to promote multiple sporting disciplines, facilitating dispute resolution (where necessary) and attracting investment into the sports sector. The development of the tourism sector through sports and leisure initiatives remains a live issue, requiring open channels of discussions between the Ministry of Tourism and Ministry of Sports, whilst also taking into consideration international standards, rules and regulations regarding the relevant sports, which are baseline requirements for attracting major events.

This article will focus on three key initiatives aiming to promote tourism in Egypt through sports and leisure activities.

In June and July 2019, Egypt hosted the AFCON, organised by the Confederation of African Football (‘CAF’). The tournament was the first AFCON with an expanded format of 24 teams (increased from the previous standard of 16 teams). It resulted in a significant increase in the number of tourists visiting Egypt during the tournament, travelling from many different parts of the world to support their respective teams.

It has been reported that AFCON 2019 attracted more than 50,000 tourists during June and July 2019. A significant increase in hotel occupancy, coinciding with the start AFCON, was recorded in the governorates of Cairo (35,000 room bookings), Alexandria (4,000 room bookings), Suez, and Ismailia (65 per cent occupancy), exceeding the normal occupancy levels. The benefits of hosting AFCON were remarkable. According to the President of CAF, Ahmad Ahmad, Egypt’s revenue from the AFCON 2019 reached US$ 83 million dollars during this relatively short period. Furthermore, several touristic and educational institutions took steps to enhance the experience of fans during the tournament, for example the Bibliotheca Alexandrina opened its doors to African fans attending the tournament and holders of official FAN IDs to enter, free of charge.

On 22 February 2020, Egypt held, for the second year in a row, the Pyramids Half Marathon at the Giza Pyramids, sponsored by the Ministry of Tourism and the Ministry of Sport. This event is one of a series of sports events which focuses on promoting tourism at the country’s archaeological sites under the slogan ‘race through history’.

In keeping with any running competition organised at an international level, the Pyramids Half Marathon adopted the rules and regulations set by the World Athletics (formerly known as International Association of Athletics Federations ‘IAAF’). In addition, anti-doping tests were conducted by the Egyptian National Anti-Doping Organization (‘EGY NADO’) on random participants and no positive tests were reported. The Pyramids Half Marathon was open to participants of all ages from different countries.

It has been reported that over 3,700 runners participated in the Pyramids Half Marathon from 77 different countries, an indication that tourists are eagerly engaging with such sporting initiatives.

Egypt is known for its wide array of water sports activities; in particular, scuba diving in the Red Sea has long been a ‘bucket-list’ experience for seasoned divers and novices alike. In 2019, the Professional Association of Diving Instructors (‘PADI’), announced Egypt as being one of the top six destinations to scuba dive. However, as diving requires certain skills and professional guidance, the authorities have been keen to note that increased numbers of tourists participating in snorkelling and diving requires an increased focus on safety measures that need to be taken in order to avoid accidents.

In September 2019, regulations regarding water activities in the South Sinai region were issued by the Ministry of Tourism to ensure the safety of tourists whilst limiting the impact of the commercial dynamics of water sports on the marine life and wildlife of the Red Sea.

The new regulations stipulate that travel agencies will be granted permission for water activities only if they do so in collaboration with licensed diving centres. Tourists must be accompanied by a licensed guide while snorkelling or diving, and will need to sign a contract that includes all their contact information, as well as all the information about their chosen dive centre and the location of the planned water activities.

In early 2020 stricter controls were imposed, so that all divers from abroad or those diving from day boats should present a medical certification of fitness to dive, issued within a year prior to the proposed diving experience. This requirement supersedes the previous system of self-declaration forms previously accepted by many operators and dive organisations.

The new regulations aim to protect divers’ safety and ensure that all necessary actions are taken to minimises the risks associated with water sports.

Several clear initiatives have been introduced to promote the dynamism of tourism offerings through sports and leisure within Egypt. The regulatory and legal frameworks of these initiatives remain under constant development both to enhance participants’ experiences and ensure their safety and security: all of which should enhance Egypt’s reputation as a tourist destination capable of attracting an increased number of visitors to enjoy both to the sports and leisure sectors and the more established historical and cultural tourism sector.