E-Cigarettes and Alcohol: Definitely or Maybe? 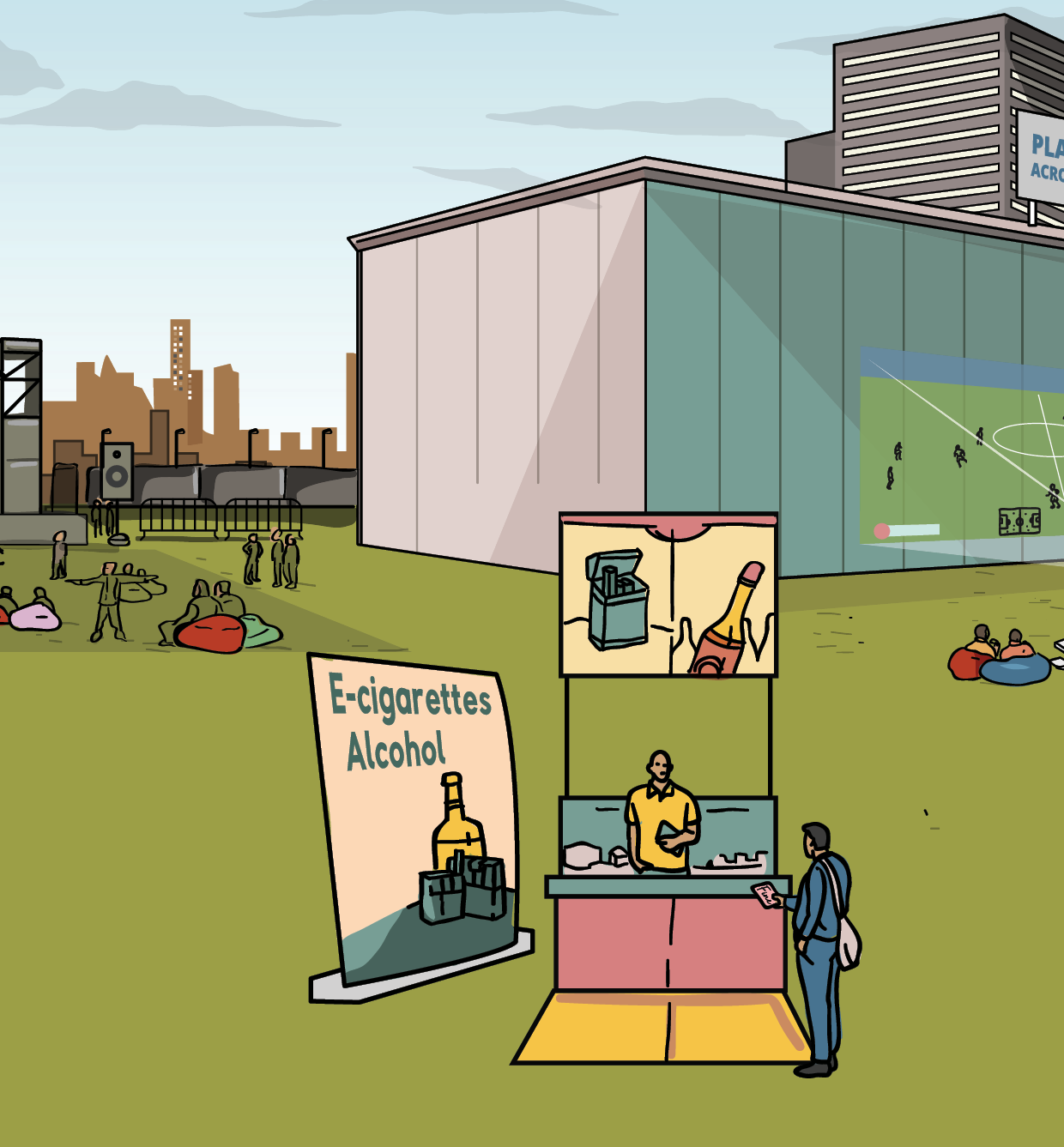 N.B. A version of this article was originally published on LawInSport (19, June 2019), the leading online international sports law publication.

The laws in the UAE concerning the sale, promotion and consumption of e-cigarettes, tobacco and alcohol can be tricky to navigate. Recent regulatory developments in the e-cigarette space have provided a welcome degree of clarity; however, venue owners, event managers and other sporting stakeholders should proceed with caution in this area to avoid falling foul of the law and offending local customs. This article provides an overview of the current regulatory landscape.

The Emirates Authority for Standardisation and Metrology (‘ESMA’) recently issued new standards for Electronic Nicotine Delivery systems (‘ENDs’, also known as ‘e-cigarettes’ or ‘vapes’). This has caused a flurry of activity amongst wholesalers and retailers alike who, for the first time, may legally import and sell such devices and affiliated products in the UAE marketplace from April 2019.

Under the new ESMA standards (5030:2018), wholesalers and retailers may import and sell e-cigarettes, electronic pipes, electronic shisha devices and e-liquid refills, so long as they conform to certain legal requirements and carry appropriate health warnings. Previously, such activities were not permitted under UAE law.

This relaxation of the restrictions on e-cigarettes and associated products has prompted a robust warning from the UAE Ministry of Health and Prevention (‘MOHAP’) that such products are potentially unsafe, particularly for young people. A recent MOHAP circular to healthcare facilities specifically alerted doctors to check whether e-cigarettes have been a factor in any reported fits or seizures, in light of similar concerns raised in the US market. The circular requests that doctors clarify whether patients have been using e-cigarettes, obtain details of the e-cigarette brand and duration of use, observe blood and/or urine cotinine levels and report any concerns to MOHAP as regards adverse reactions to e-cigarette products.

Despite the abiding concerns regarding the safety of e-cigarettes, increased regulation should allow authorities to clamp down on the hitherto active black market in illegally imported (and often dangerous) devices and refills sold in the UAE. This development also perhaps reflects a commonly held view that e-cigarettes are the lesser of two evils when compared to regular cigarettes. However, their use remains subject to much the same controls as regular cigarettes in the UAE, including a prohibition on use in certain public areas such as shopping malls and cinemas.

Advertising of E-Cigarettes and Tobacco

In the sporting context, rights holders, teams and venue owners are increasingly cognisant of developments in the e-cigarette space. Sport has had a chequered history of dependence on tobacco sponsorship revenues over the years. Formula 1, in particular, was synonymous with tobacco advertising for decades until it was banned in 2007, prompting the exit of long-time sponsors such as West and Lucky Strike from the sport. Nevertheless, the 40+ years association between Phillip Morris International (‘PMI’) and Scuderia Ferrari endured, albeit largely reduced to a corporate hospitality footing. That remained the case until 2018, when PMI’s ‘Mission Winnow’ branding appeared on Ferrari’s cars and driver’s helmets in the final five Grand Prix races of the 2018 season, including the season-ending Formula 1 Etihad Airways Abu Dhabi Grand Prix. Mission Winnow is a CSR initiative to showcase PMI’s scientific pursuit of less harmful ways to consume tobacco. Following closely on PMI’s heels, British American Tobacco (‘BAT’) announced an eight-year partnership with McLaren from 2019 onwards, under ‘A Better Tomorrow’ branding designed to promote BAT’s portfolio of ‘potentially risk-reduced products’.

The extent to which such campaigns will be tolerated remains to be seen. Early signs suggest that host countries, rather than sporting regulators, will take the lead on this front. Indeed, increased scrutiny by Australian regulators (and calls from the World Health Organisation) appears to have played some part in Mission Winnow and ‘A Better Tomorrow’ branding being removed for the 2019 season-opening Australian Grand Prix (although PMI deny any link in this regard). Mission Winnow was also removed from the 2019 official team name of Scuderia Ferrari, having formed a part of it in pre-season testing. Mission Winnow and ‘A Better Tomorrow’ branding did, however, appear at subsequent Grand Prix, with McLaren taking matters a step further by including Vype (a BAT e-cigarette product) branding as part of its car livery at the 2019 Bahrain Grand Prix, marking the first occasion a Formula 1 team has promoted an e-cigarette product by name.

Federal Law No. 15 of 2009 prohibits the promotion of tobacco products directly and by any other means which stimulate trading and increase the number of users. UAE Cabinet Decision No. 24 of 2013 prohibits the direct or indirect provision of information regarding tobacco products with the aim of encouraging the tobacco trade or increasing the number of tobacco consumers. Similarly, tobacco advertising and promotion are defined broadly in the WHO FCTC and capture activities having the effect or likely effect of promoting a tobacco product or tobacco use either directly or indirectly. It seems likely therefore that the lawfulness of the PMI and BAT campaigns under UAE law will hinge on whether e-cigarettes are considered to fall within the definition of ‘tobacco products’ (which is a matter of some debate as, for example, some e-cigarettes contain laboratory synthesised nicotine, rather than nicotine derived from tobacco) and the extent to which such campaigns are considered to indirectly promote such products.

Albeit less headline-grabbing in nature, the legalisation of e-cigarettes could also lead to other practical considerations for sporting venue owners and attendees. For example, larger designated smoking zones may be needed at venues to reflect the increasing popularity of such products. Visitors to Expo 2020 Dubai and tourists in the UAE, will be pleased that they can, if they so wish, bring their e-cigarettes with them into the UAE or purchase such products whilst in the UAE without falling foul of local laws.

The position as regards alcohol sale and consumption in the UAE is more settled, being only permitted in specific designated areas, including licensed restaurants and bars attached to hotels. It is acceptable for tourists and non-muslim UAE residents to drink alcohol in such locations, provided that the latter obtains an alcohol licence before doing so. Anyone brought to the attention of the police who has consumed alcohol may be arrested outside of the designated area where they consumed the alcohol. Being drunk and disorderly, in a public area in the UAE is a serious offence and may result in imprisonment for up to six months and fines of between AED 1,000 to 2,000. In addition, there is a zero tolerance approach to drink driving. Holding an alcohol licence does not permit that person to drink in public places or to be intoxicated in a public area, in accordance with Dubai Law No. 16 of 1972 concerning alcohol beverage control.

The UAE’s National Media Council has issued guidelines for advertisers, making it clear that advertising for alcohol (and e-cigarettes/tobacco) is prohibited in all forms in the UAE, including social media. A contravention of the NMC guidelines could result in that company being fined and shut down for six months, as well as the senior management being at risk of imprisonment under the UAE Penal Code. However, confined alcohol promotion at sports and other mass attendance events in the UAE is a relatively common sight, purportedly under the umbrella of the alcohol licence held by the relevant establishment on such occasions. Accordingly, attendees at events such as the Dubai Duty Free Tennis Championships, the Emirates Airlines Dubai Rugby Sevens and the newly opened Coca-Cola Arena may see contained alcohol promotion, for example branded neon signs, brand specific bars, and ‘two for one’ offers. Often such promotions are in screened-off areas at such venues, but this is not always the case. This may indicate that the level of understanding of the relevant laws is inconsistent, or simply that some stakeholders are more alert to the risks than others.

Navigating the UAE regulatory landscape therefore requires careful thought, in particular by alcohol and e-cigarette companies, venue owners and event operators alike to ensure that all relevant federal and local laws are complied with and local customs respected.