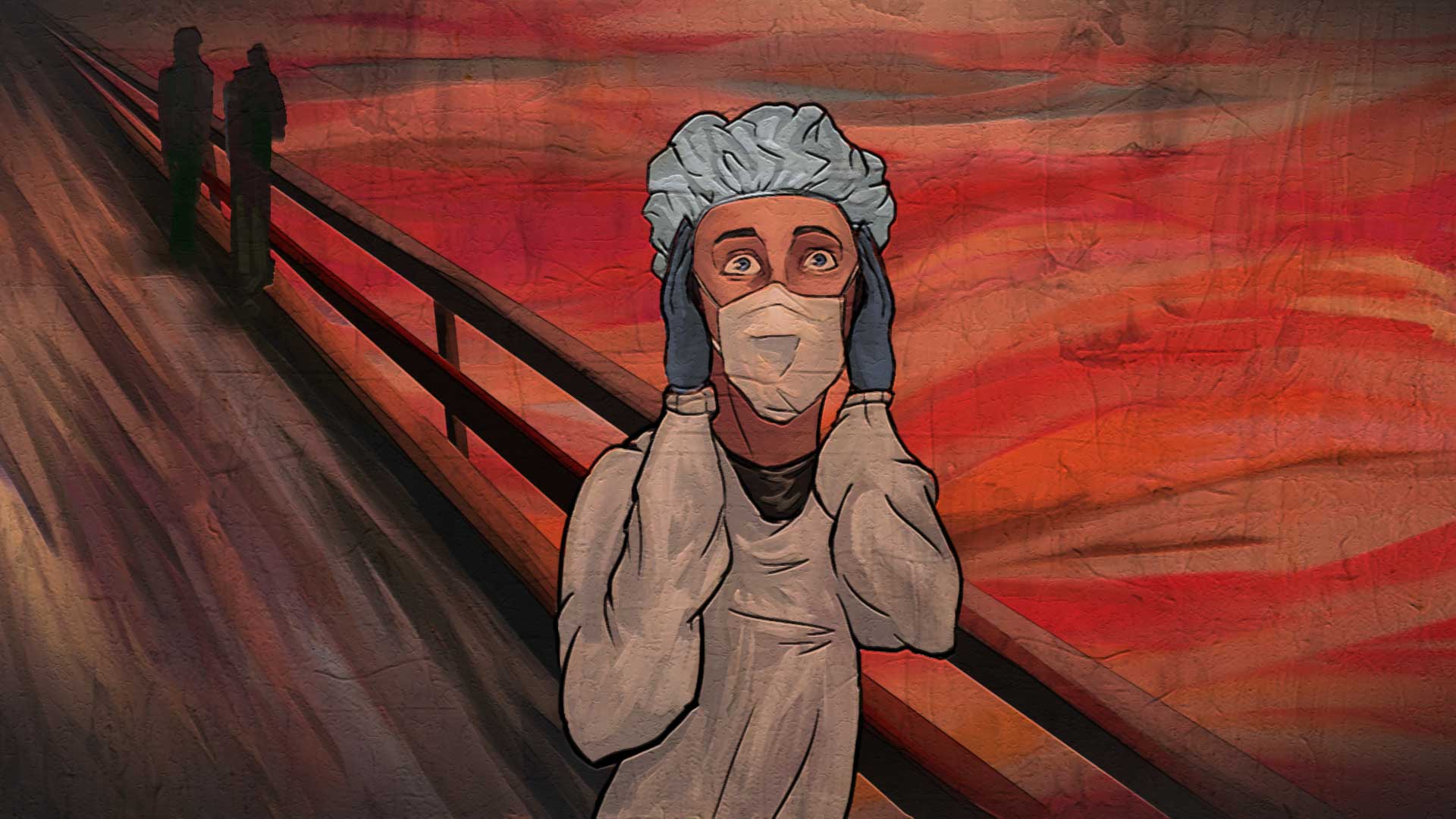 This illustration is inspired by the original painting of The Scream by Edvard Munch.

Clinical research is a type of medical research conducted on humans. There are two types; observational studies and clinical trials. Clinical trials are research studies that prospectively assigns human participants or a group of humans to one or more health-related interventions; being new drugs or new treatments to evaluate their side effects and overall effectiveness on the human body.

The past two decades have witnessed a considerable shift in the location of clinic al trials sponsored by transnational pharmaceutical companies with a significant expansion of such tests being conducted in low and middle-income communities compared to them being carried out in high-income countries such as the USA, EU countries and Japan during the 1990s.

In the recent years, the MENA region has been projected to be one of the fastest growing markets for clinical research, due to availability of the required infrastructure, access to patients, faster timelines and lower costs compared to other markets.

Egypt as a Clinical Trial Hub

As the second-biggest destination country for clinical trials in Africa, Egypt has witnessed a steady increase in the number of trials it hosts due to the country being a home for an attractive research infrastructure, a fast growing and largely treatment-naïve[1] population. According to the United States National Institutes of Health (US NIH|) Database, Egypt is also among the most popular places for offshoring medicine testing in the Middle East.

During the past decade, clinical trials have gained immense attention in the Egyptian community due to its controversial nature, risk of ethical threats and possibility of patient exploitation.

Over half of all international active drug studies in Egypt are cancer trials, followed by infectious diseases and metabolic disorders. The vast majority of such trials are late-stage trials related to products that are already licensed in high-income countries.  Majority of the clinical trials taking place in Egypt are in Cairo, followed by Alexandria, together accounting for about more than 75% of all clinical trial sites in Egypt.

A need for a Legislative Framework

Today, with thousands of on-going active trials taking place in Egypt, majority of which are Phase III trials and others in relation to COVID-19, there was an urging necessity to introduce a robust legislative framework to provide clear guidance to stakeholders involved in executing clinical trials.

On 24 August 2020, the Egyptian Parliament approved a clinical medical research bill to be later issued on 23 December 2020 by virtue of Law No. 214 of 2020 (“the “Law”).  Being considered the first unified legal framework regulating medical research, the Law has entered into effect outlining the foundations and standards required for conducting medical research.

The Law defines the research participant as the person subject of clinical trial, whether he is a patient suffering from the disease or a healthy person and whether he is subject to actual medical interference or part of a control group[2] (“Subjects”).

Clinical trials in Egypt are preceded by pre-clinical research which must be approved in writing by EDA and are conducted in a typical series of four (4) phases:

Phase I: involving a small group of healthy Subjects or Subjects with the disease or condition (usually 20-80 persons), to evaluate the safety of testing the drug or treatment or medical instrument.  Under this phase, the Subjects are arranged in small groups and each group shall be tested following verification of safety of the trial on the preceding group.

Phase II: The drug or treatment or medical instrument is used with a larger group of people with the disease/condition (200 to 300 persons) to see if it is effective and to further evaluate its safety.

Phase III: The drug or treatment is given to large groups of people with the disease/condition (hundreds to thousands) to confirm its effectiveness, monitor side effects, compare it to standard treatments.

Phase IV: Studies that are done on a large number of people with the disease/condition (usually several thousands) after the drug or treatment has been marketed and approved for trade, to gather information on the drug’s side effects associated with the long-term use as well as to ensure the continuous safe use of the drug.

All above phases may be carried out for trials originating in Egypt provided that the Egyptian Drug Authority (“EDA”) reviews the results of each phase and approves the commencement of the following phase beforehand. As for trials initiated abroad, the Law permits the carrying out of Phase III and IV upon approval of the results of Phase I and II. The aforementioned was not regulated before emergence of the Law.

The Law provides for the necessity to obtain the explicit and clear approval of the Subjects and in the event such Subjects belong to a category of persons requiring additional protection, the approval of their parents, their guardians or their legal representatives must be obtained.

According to the Law, in order to initiate any clinical trial, a specific trial protocol must be prepared, reviewed and approved by EDA.  Additionally, the approval of the Supreme Council supervising ethical matters in relation to clinical trials (the “Supreme Council”) must be obtained in the event the clinical trial in question involves (i) experimenting new pharmaceutical or biological compounds, (ii) new uses or forms of such compounds, (iii) medical supplies and instruments that have not been previously used on human body and have not been approved by the competent International bodies accredited in Egypt.

The Supreme Council determines the standards and rules regulating the ethical control of the clinical trial for purposes of protecting the Subjects, their samples and their personal information, all in accordance with the accepted international standards.

The Law requires EDA to be in charge of (i) conducting scientific analysis of all pharmaceutical or biological drugs before clinical trials to reduce risks of Subject exploitation, (ii) evaluation of the results of pre-clinical and clinical trials, and (iii) investigating clinical sites to ensure that all clinical trials are conducted in accordance with current best practice and international standards.

As a reinforcement of protection, the Law states that in the event of a clinical trial conducted in violation to the approved protocols or in the event such trials result in the Subject suffering from dangerous side effects or any side effects that were not expected at time of approving the protocol, the Supreme Council shall issue a justified decision (i) suspending the clinical trial for a duration of no longer than one (1) year, (ii) rejecting the renewal of trial and/or (iii) ending the trial before its termination date. In addition to the imposition of several criminal penalties in the event of conducting clinical trials in violation of the Law.

According to the Law, Subjects shall not, in any case, participate in another clinical trial before the termination of the duration of the on-going trial the Subject is a participant in.

According to the Law, the Subjects of clinical trials conducted in Egypt shall benefit from the following rights:

The Law is considered a long-awaited legislative and medical leap that will allow the Egyptian health care system to contribute to combatting deadly diseases and limiting their exacerbations without having to put vulnerable humans at risk.

[1] According to researches and clinical trial reports, “treatment-naïve” means individuals who have not received earlier treatment for a given illness, making them respond better to the medication.