Bound by Conventions: The Enforcement of Judgments and the Service of Proceedings of the Courts of Saudi Arabia, the Dubai International Financial Centre and the Abu Dhabi Global Market 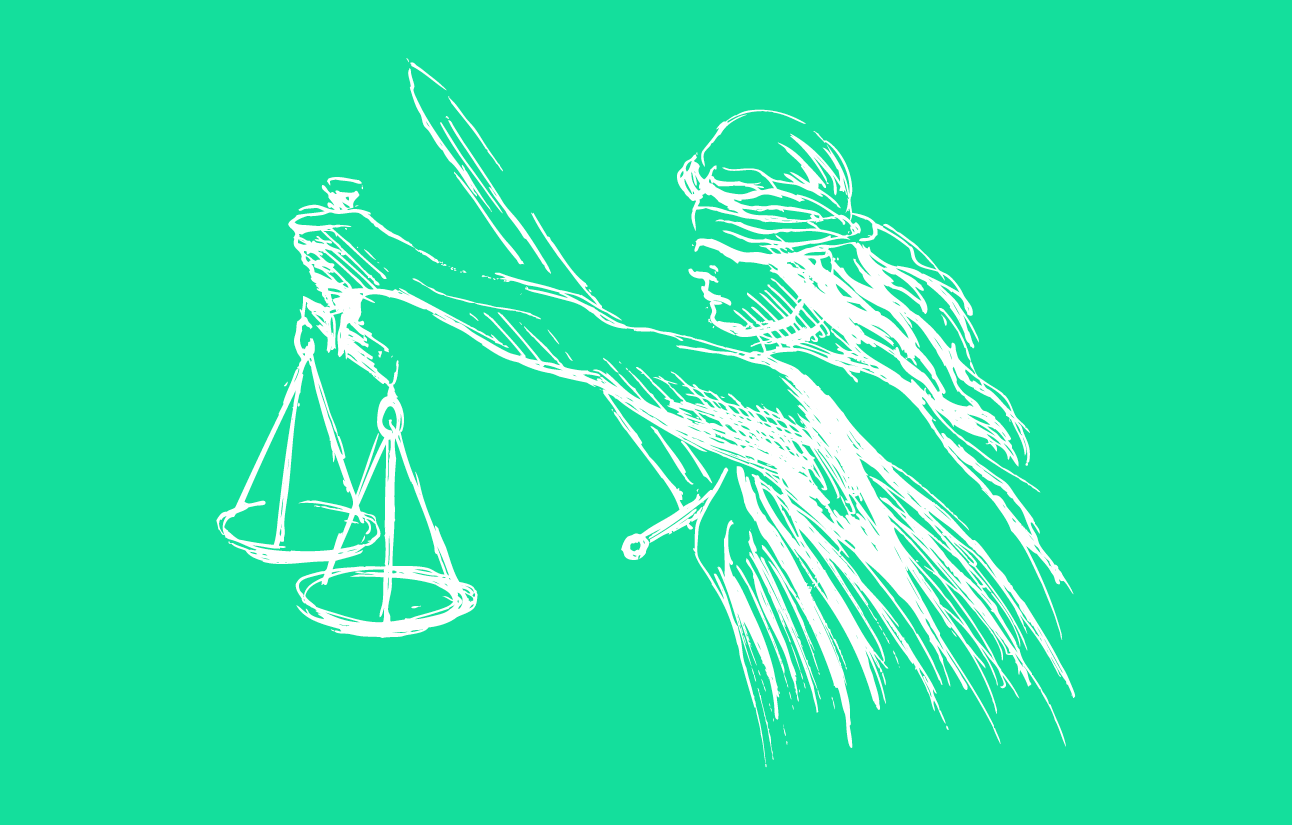 As the Kingdom of Saudi Arabia (‘KSA’) moves towards fulfilment of its Vision 2030 programme, the country’s legal system is increasingly becoming connected to the international judicial order, including to the UAE’s common law courts in the Dubai International Financial Centre (‘DIFC’) and the Abu Dhabi Global Market (‘ADGM’).

The DIFC Courts have recently recognised and enforced a banking decision made by a Saudi quasi-judicial tribunal, the Committee for the Settlement of Banking Disputes (part of the Saudi Arabia Monetary Agency), brought to the DIFC for enforcement against the assets of a branch of a foreign bank in the free zone. The process confirmed the conventional rules of enforcement of a Saudi judgment, order or decision in the DIFC Courts. This article explains several recent developments in the relationship between KSA and the common law jurisdictions concerning the enforcement of judgments and the service of proceedings.

The Riyadh and GCC Conventions: linking KSA and the UAE

There are two key international agreements governing enforcement and service in the region to which both Saudi Arabia and the UAE are parties: the 1983 Riyadh-Arab Agreement for Judicial Co-operation (the ‘Riyadh Convention’) and the 1996 Gulf Co-operation Council Convention for the Execution of Judgments, Delegations and Judicial Notifications (the ‘GCC Convention’). The Riyadh and GCC Conventions cover many of the same topics, such as the recognition and enforcement of civil judgments, rogatory assistance by domestic courts in aid of foreign proceedings, and the service of legal documents including court proceedings.

The main difference between the two instruments is in their scope. The Riyadh Convention has 18 state signatories, from across the Arab world (the UAE, Jordan, Bahrain, Tunisia, Algeria, Djibouti, Saudi Arabia, Sudan, Syria, Somalia, Iraq, Oman, Palestine, Qatar, Kuwait, Lebanon, Libya, Morocco, Mauritania and Yemen). The GCC Convention, by contrast, is limited to just the six members of the GCC: the UAE, Bahrain, Saudi Arabia, Oman, Qatar and Kuwait. As a result, many Arab parties, lawyers and judges are more familiar with the operation of the former Convention over the latter. Both Conventions are ratified in the UAE and so deemed part of the applicable domestic laws of the state.

Article 1 of the GCC Convention states that “each of the GCC countries shall execute the final judgments issued by the courts of any member state in civil, commercial and administrative cases…”. In order for a judgment to be enforceable, the originating court must have had jurisdiction in accordance with the definition in the Convention. The various jurisdictional gateways are set out in Article 4 and are as follows:

The GCC Convention also sets out, at Article 2, a number of grounds on which enforcement may be contested. The grounds for rejection of enforcement, in full or in part, include:

However, the merits of the claim may not be reviewed, as Article 7 makes clear: “The task of the judicial authority of the state where the judgment is required to be executed shall be limited to confirming whether the judgment fulfils the requirements as provided by this agreement, without discussing the subject matter…”

The Riyadh Convention follows a similar pattern. Article 25(b) sets out the general power and obligation to enforce judgments, orders and decisions “regardless of nomenclature made in pursuance of judicial or jurisdictional procedures of the courts or any competent authority of any party”:

The Riyadh Convention requires that the originating court has jurisdiction in accordance with the laws of the enforcing state, and sets out the circumstances in which the originating court shall be considered to have jurisdiction. A broad range of jurisdictional gateways are set out at Articles 16 and 26 to 29 of the Riyadh Convention, similar to, but slightly wider in scope than, the provisions of the GCC Convention on jurisdiction. Article 32 mirrors Article 7 of the GCC Convention and sets out that the enforcing court may not review the merits of the decision when deciding if the judgment to be enforced complies with the required provisions. The exceptions to enforcement at Article 25(c) are the same as Article 2(d) and 2(e) of the GCC Convention, with the addition of cases of “Provisional and precautionary measures and judgments made in cases of bankruptcy, taxes and fees”. The exceptions at Article 30 of the Riyadh Convention mirror those at Article 2, with the specific additions of failures to take into consideration the law of the requested party applicable to legal representation of ineligible persons or persons of diminished eligibility.

Enforcement in the DIFC and ADGM

Although the civil and commercial laws of the UAE are not generally applicable in the DIFC or ADGM, the terms of treaties that form part of the law of the UAE are still binding within both free zones. In the DIFC, Article 24 of the DIFC Court Law (DIFC Law No. 10 of 2004) provides that the DIFC Court of First Instance has jurisdiction to ratify any judgment, order, or award of any recognised foreign court, and notes that, where the UAE has entered into an applicable treaty for the mutual enforcement of judgments, orders or awards, the Court of First Instance shall comply with the terms of that treaty.

In the recent enforcement action, the DIFC Court made a number of findings on the application of the GCC Convention in the context of the enforcement of a decision emanating from a Saudi tribunal:

The rules of the ADGM Courts on the enforcement of foreign judgments appear, at first blush, to be more restrictive than the DIFC Courts. The DIFC Courts do not require reciprocity of enforcement before enforcing judgments sent from another jurisdiction. The ADGM Courts, on the other hand, do require reciprocity to be established. For the purposes of enforcing a Saudi judgment, this requirement is satisfied by Article 170 of the ADGM Courts, Civil Evidence, Judgments, Enforcement and Judicial Appointments Regulations 2015, which states that, where the UAE has entered into an applicable treaty with a foreign country for the mutual recognition and enforcement of judgments, the ADGM Courts shall comply with the terms of such treaty and recognise and enforce judgments rendered by that foreign country. In the case of judgments rendered by Saudi Courts, the requirement for reciprocity is established by the GCC and Riyadh Conventions. There is no bilateral arrangement between the Saudi Courts and the ADGM or the DIFC. 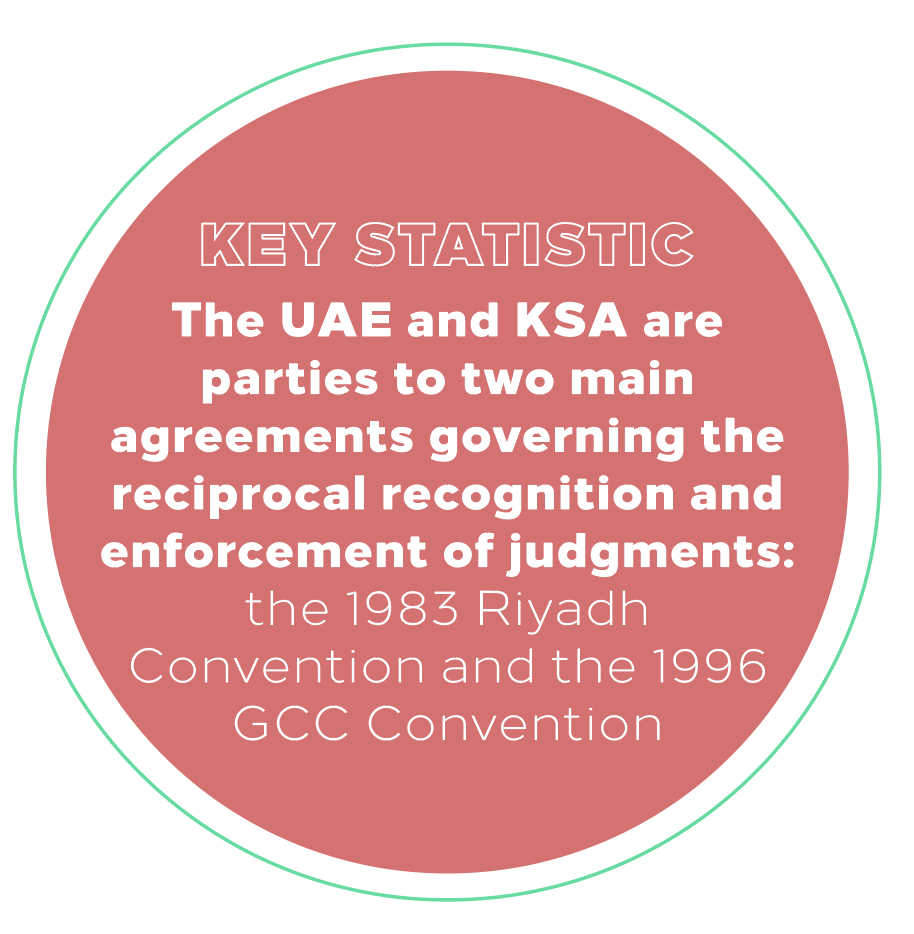 In a recent dispute concerning the enforcement of an arbitral award, the DIFC Courts Registry worked with the Courts of Dammam to effect the service of DIFC proceedings in Saudi in accordance with Saudi law, having previously successfully effected service in the Kingdom through the Courts of Riyadh. Based on these experiences, the process for service in Saudi Arabia has been confirmed by the Registry. The party seeking to serve outside of the DIFC or Dubai must firstly file an application and pay a filing fee of US$ 300. The Registry staff require two complete copies of the materials to be served, which are to be certified by the DIFC Courts. Accompanied by a letter from the Registry setting out why the documents should be served, the copies are sent to the court registry in the appropriate district in Saudi Arabia. The Saudi Courts stamp both sets of documents and serve one set on the Saudi address. The other set is returned to the DIFC Courts with a letter confirming that service has or has not been carried out. The DIFC Courts have built a network of personal relations with court staff in KSA to further the mutual and reciprocal process and a recent process of service took less than two weeks to complete.

Enforcement of DIFC and ADGM Proceedings in KSA

Not only are Saudi Court judgments enforceable in the DIFC and ADGM, the corollary should also be true, and the Riyadh and GCC Conventions should provide for enforcement of DIFC and ADGM judgments in KSA, subject to local rules. The official DIFC Courts Guide to Enforcement makes clear that “On the premise that the DIFC Courts are the courts of a GCC member state, other GCC nations should enforce DIFC Courts judgments in accordance with Article 1 of the Convention, and should not distinguish between them and other judgments emanating from the Dubai Courts”. As far as we are aware, to date no DIFC or ADGM Court judgments, orders or decisions have been taken to Saudi Courts for recognition and enforcement. The DIFC Courts Enforcement Guide recognises the pragmatic reality of seeking to enforce a DIFC judgment in a foreign jurisdiction like Saudi Arabia where the receiving courts may not be familiar with the establishment and process of the sending courts. Judgment creditors may consider obtaining recognition of the judgment or order in the Dubai or Abu Dhabi Courts first before going on to seek enforcement outside the UAE.

Given the DIFC’s success in obtaining service of proceedings in KSA by the district courts, this position may change, particularly in light of the recent enforcement of a French Court money judgment successfully executed against assets in KSA. In the absence of a bilateral or multilateral judicial co-operation treaty between KSA and France, the judgment creditor supplied evidence from French lawyers that the French Courts had enforced Saudi Court judgments in the past and the requirement of reciprocity was established. This may provide not just a legal precedent but also a procedural pathway for the future enforcement of common law judgments, orders and decisions.

These recent developments show that it is becoming easier to serve foreign proceedings and enforce foreign judgments in KSA and the UAE’s common law courts. This should not be a surprise: close international ties exist between judges of the ADGM and DIFC Courts and the judiciary in KSA. Justice Ali Al Madhani of the DIFC Courts, for instance, has a specific remit to be involved with initiatives that help foster inter-regional relations with judiciaries in countries such as Saudi Arabia, with a view to encouraging knowledge exchange, best practices, and training, “and in some cases, enforcement services”. In future, judgments from the ADGM and DIFC Courts may be as portable and enforceable in KSA as UAE-seated arbitral awards are under the 1958 New York Convention on the Recognition and Enforcement of Foreign Arbitral Awards.

The International Litigation Group has experience of advising on the enforcement, in the UAE, of judgments and orders made by Saudi tribunals and the enforcement of Saudi-seated arbitral awards. For further information, please contact Peter Smith (p.smith@tamimi.com), Peter Wood (p.wood@tamimi.com) or Rita Jaballah (r.jaballah@tamimi.com).