The Establishment of the Egyptian Maritime Circuits 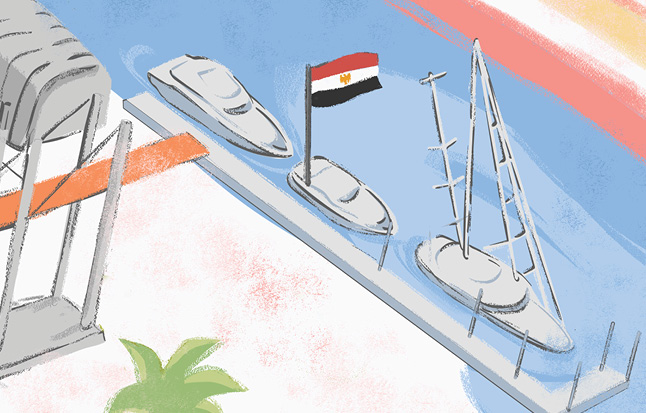 One of the most significant issues that the Egyptian judiciary system has faced since the early 1950s is the unnecessary delay in concluding claims lodged before the Egyptian courts. In an attempt to reduce the duration of commercial claims before the court, the Egyptian legislators introduced Law No. 120 of 2008, which was published in the Official Gazette on May 22, 2008, and which came into force on October 1, 2008 establishing the Egyptian Economic Courts, which aims to overcome this chronic problem. The Egyptian Economic Courts were granted a specialised juridical nature, overseeing economic matters in both criminal and civil proceedings, offering expedited commercial redress.

The Economic Courts’ structure is composed of Chambers of First Instance and Chambers of Appeal. Appeal is available under the Economic Courts Law for cases involving amounts of five million EGP, or its equivalent, to US$ 310,000 or less. If the value is higher, the case should be litigated directly in the appellate circuits and the decision may be subject to further appeal before the Court of Cassation. The Egyptian Economic Courts are geographically located in eight Egyptian Governorates (Cairo, Alexandria, Tanta, Mansoura, Ismailia, Beni Suef, Assiut, Qena.).

The Economic Courts have established new circuits, which have jurisdiction over economic matters in both criminal and civil proceedings. The said Court is dedicated to the investors and disputants engaged in economic activities and overseen by specialised judges in those type of claims, with a view to expediting commercial and investment dispute resolution claims, without further burdens on the litigants, in the interests of attracting more foreign investment into the country.

Since its inception in 2008, the Economic Courts have improved the efficiency of dispute resolution in relation to commercial matters heard before courts, and they have gained a reasonably good reputation, in comparison to the ordinary court system.

On August 7, 2019, Law No. 146 of 2019 amending some provisions of the Law on the Establishment of Economic Courts promulgated by Law No. 120 of 2008 was issued. The new law expanded the jurisdiction of the Economic Courts, to hear claims related to the Commercial Maritime Law and Civil Aviation Law among other laws. At the outset, it appears the Egyptian legislators have increasingly paid attention to the significance and importance of resolving claims that involve international transactions of a maritime and/or an aviation nature.

In a move to a more digitalised legal system, the new amendments have introduced the electronic litigation system for the first time in the history of the Egyptian judiciary system. A designated portal of the Economic Court will be created, and is expected to be operational by early October 2019.

The portal will be dedicated to the electronic establishment, registration and announcement of cases; whereby the litigants will be notified via their e-mail addresses, and have to register, peruse and file their claims online. Moreover, the court fees and expenses will be paid online through a secured payment system.

The new amendments have enhanced the role of the preparation judge (the ‘Preparatory Panel’), which comprises one or more judges, from the judges of Economic Appeal Courts. The Preparatory Panel shall be responsible for verifying the completion of the pleadings, examining and reviewing the associated documentation, scheduling hearings for claims, preparing a memorandum summarising claims and supporting arguments, as well as other aspects of conflict between the parties, within a period not exceeding 30 days from the date of filing the case.

The head of the circuit may grant the Preparatory Panel an extended period of 30 days for completing the preparation; otherwise, the circuit shall hear the claim.

The new amendments also allow the competent court, upon request of the litigants, to suspend the proceedings of any claim heard before the court and refer it back to the Preparatory Panel in order to conduct settlement negotiations between the parties. The new amendments also give authority to the Preparatory Panel to seek the assistance of any of its experts for the conclusion of its work.

Moreover, any party to a dispute, which falls under the jurisdiction of the Economic Courts, may apply directly to the chief judge of the Preparatory Panel with a view to settling the dispute amicably without filing a claim.

The Preparatory Panel will have a significant impact on maritime and aviation claims, particularly where an amicable solution is preferred and accepted by the litigants. Further, the procedure will enable time and cost savings through the promotion of settlements. Also of note, is the recognition of any new approved form of guarantees generally recognised by the maritime/aviation practice and P&I clubs. For example, P&I Club LOUs will be considered good forms of security.

The new amendments provide that the ordinary commercial courts, currently hearing any claim falling under the jurisdiction of the Economic Courts, must refer those claims directly to the competent Economic Courts, without any additional fees.

However, this amendment raises a number of problems. For example, the number of geographical locations of the current Economic Courts does not cover all cities and Governorates, including those which have major ports such as the Suez Governorate and Damietta. For the avoidance of such geographical disruption, experience suggests that two new Economic Courts in the Governorates of Suez and Damietta be established, and even though the suggestion was widely accepted by many judges and courts; the proposal is still under the consideration by the competent authorities

The establishment of a specialised maritime circuit is anticipated within the Egyptian Economic Courts to hear the claims relating to commercial maritime and civil aviation laws, where the judges will have a maritime background, which will insure an expedited decisions in those type of claims instead of those suffering unjustified delays before the ordinary court which have been known to drag on for many years and which usually result in an unfavourable outcome whereby the vessels are abandoned and consequently the maritime environment is exposed to pollution.

In conclusion, the new amendment to the Economic Courts law aims to attract investment by updating its legislation to keep pace with the changes taking place in the country. The new amendments are key to providing a fertile atmosphere for investment in Egypt through the development of Economic Courts, as they are competent to hear special economic claims and disputes.