Is AI an existential threat to The Firm? 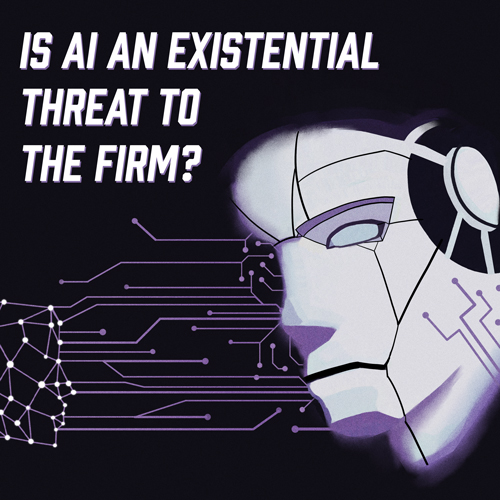 The DIFC and ADGM Courts are amongst the most tech-savvy courts in the world. As a result, an article considering the radical impact that artificial intelligence is having on the legal profession, and the delivery of legal services, is not misplaced in this edition.

A concern that is increasingly voiced about advances in artificial intelligence is its potential to replace jobs in various sectors. Many lawyers, like other professionals, are guilty of a little hubris in response, believing that the nature of many tasks that comprise their professional lives cannot adequately be performed by machines. The thrust of this article is that they are mistaken.

For anyone sceptical about the imminent impact of artificial intelligence on the legal profession or otherwise, there is a quick remedy. This YouTube video from five years ago (https://www.youtube.com/watch?v=eG1Ed8PTJ18) shows Google’s DeepMind teaching itself to play Breakout, the famous Atari game of yesteryear. As you will see, initially DeepMind is pretty atrocious. However, after 34 hours of playing, it is better than most humans, and after 70 hours is playing at a superhuman level. The key point to bear in mind when watching this video is that Google DeepMind has not been programmed or taught how to play the game. It is simply fed the pixels on the screen that make up the images and instructed to maximise its score. It figures the rest out for itself. Google DeepMind has since graduated to more complicated 3D games.

Scepticism about the impact of artificial intelligence is usually founded on a fallacy about the nature of artificial intelligence projects worldwide. It is often thought that the objective of these is to replicate the inner workings of the human brain. Although this might once have been the objective, it no longer is. Instead, the idea is to create machines that are capable of learning from experience and performing human-like tasks in ways that are often quite unlike human cognitive processes.

How is Artificial Intelligence currently deployed in the legal sector?

A single word comes to mind when considering the current deployment of artificial intelligence in the legal sector: “triage”. The AI-powered software tools currently being used by law firms and others are used to assist lawyers, often at the outset, with their tasks by highlighting anamolous clauses in contracts or, for example, doing a first sift of documents in a due diligence exercise to find potentially relevant ones. This current deployment is intended to save time, with associated cost benefits to clients.

Below are some examples of the ways in which artificial intelligence is currently being used to assist lawyers:

Due diligence and discovery – Once a lawyer has reviewed a few hundred documents and classed them as either relevant or irrelevant, predictive coding uses prediction models to distinguish additional relevant documents from thousands of irrelevant ones. Given that this task was previously performed by a team of junior lawyers, it affords significant cost savings to clients.

Contract automation –There are a number of start-ups that have developed software programmes that contextualise the information in large volumes of contracts so as to, for example, identify deadlines for the performance of contractual obligations and identify high-risk clauses.

Legal analytics and prediction technology – There are software programmes that purport to be able to predict the outcome of cases with more than 90 per cent accuracy (see Blue J Tax for example), analyse the past judgments of a particular Judge to assess how they will determine future cases and programmes that provide the “win rate” of a particular lawyer. Formal legal opinions often neglect these very human elements that affect the outcome of a case. As a result, such tools enable lawyers to provide a more accurate and comprehensive analysis of a litigant’s prospects of success. Further, litigation funders are increasingly relying on artificial intelligence to conduct data-sensitive assessments of which cases are worth funding.

Legal research – Existing research tools for lawyers usually require lawyers to input very specific search terms to obtain relevant legal materials (statutes, case law etc.). A missing hyphen or a stray comma can make a difference to the search results. Through the use of natural language programming, AI-powered software programmes are increasingly able to answer questions, albeit of a general nature, in natural language.

What’s to come? The emergence of the Robo-lawyer

Despite the encouraging developments mentioned above, the reality is that for most lawyers their dominant tools of practice remain Microsoft Word and Outlook. This is likely to change quite drastically in the coming years as the most effective AI tools for the legal profession emerge, and are widely adopted, out of the plethora of current tools available.

However, beyond the next few years, there is likely to be increased automation in the delivery of legal services such that the human element in the current triage model becomes increasingly less significant. This will mean that some roles that lawyers perform will be entirely replaced by machines. However, there are other roles that are less endangered by developments in artificial intelligence, at least in the short to medium term. Amongst these are the roles of the trusted legal adviser and the trial advocate. However, on a long enough timeline, it’s not difficult to see even these roles being replaced by machines.

By way of example, with further advances in natural language processing allowing machines to process hundreds of years of case law beyond the capability of any human, it will be possible for a client to explain its situation at length and be provided with sophisticated advice from a robo-lawyer. That may not sound like an enticing prospect given our natural tendency to seek advice from fellow humans, but in circumstances where the interface will be a friendly and emotionally responsive human (albeit computer generated), there may be little discernible difference in receiving advice from a machine rather than a human. In this regard, advances in “affective computing” are impressive, with machines more accurately able to discern a particular emotion of a human face than the average human.

Over the coming years and beyond, artificial intelligence is likely to cause a gradual shift from the triage model to one of greater automation where human lawyers play a lesser role in the delivery of legal services, with significant cost savings for clients. Although this will involve less lawyers being required across the legal sector, it is unlikely to result in an end to the profession as a whole within our lifetimes. Instead, lawyers will offer whatever the most advanced AI tools of the time cannot.

Much like Tom Cruise in the famous 90s legal drama, The Firm, are we lawyers at threat of extinction?