“Into the Garbage, Fly Boy”: A Review of the Star Wars Legal World; One Court at a Time 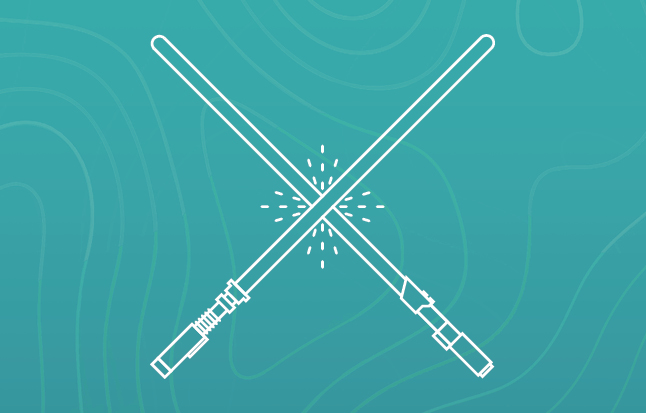 A long time ago in a court house far, far away the world created by George Lucas has become much more than simply a film franchise.. As the all time classic Star Wars “Episode IX: The Rise of Skywalker”, hits our screens it seems appropriate to review this iconic representation of film making and storytelling from the late 20th century which leaves us with not only a creative legacy but also a number of fascinating legal precedents.

The commercial model has been discussed many times. Lucas famously retained merchandising rights within the original deal with the studio. Because of this, Lucas retained what has now become a vast merchandising empire – comprising figurines, backpacks, hats, T-shirts, talking Wookie masks as well as rights over character licensing. This decision not only generated additional revenue but gave Lucas incredible control over the way in which the franchise was perceived by the public.

Lucas was not shy about seeking to protect rights through the courts across the globe. Some of these cases have become landmark cases in the legal framework that underpins the film and merchandising industry. In and of themselves, they often have stories that are interesting and still relevant – although unfortunately without droids and lasers.

The 1970s was a time when entertainment across the board was looking to the stars. Dr. Who and Blakes 7 were topping the chart in UK television, and Happy Days in the US even introduced an alien called Mork (with apologies to anyone under 50 who had to do an online search to understand all of that).

Star Wars came at a time when the world’s obsession with space and space travel was already at a high level. So, it was no surprise that, when other space adventure films started to hit the market, Lucas tried to claim that this other space dynasty had ‘stolen; their story line and their idea for the film. In 1978, the epic court battle between the producers of ‘Battlestar Galactica’ and producers of ‘Star Wars’ began in earnest.

For the casual outsider, the producers were fighting for the right to own a storyline that had proven to be lucrative, but underpinning that was also an argument about originality and the complexity of copyright protection. Many questions were raised:

At what point is the storyline so developed that it can be protected?

At what point can one claim that the storyline is so original that it deserves protection from all other potential competitors?

At what point can you claim that your storyline was stolen by somebody else?

These questions still plague producers globally. The case was, even at that time, a case that producers hoped would provide some clarity as to the legal position in relation to the original storyline. The case unfolded in the California courts and stretched ominously over several years.

Lucas (represented by Fox in this case) identified various aspects of their storyline and claimed that Battlestar Galactica has appropriated each of those elements in a manner that infringed its copyright. Fox undertook a classic scene-by-scene storyline breakdown and, it seemed clear on analysis, that they had some justification for their concerns. For example, each deals with a large scale war between two forces across the galaxy. In both, there is a good leader that is an older man of great wisdom and leadership. There is a hero who is linked to the ruling family, his roguish friend, and a heroine who falls in love. Battlestar Gallactica even included a room filled with weird creatures playing music, similar to the famed cantina scene of Star Wars. In all they isolated 34 points of similarity in the storylines. 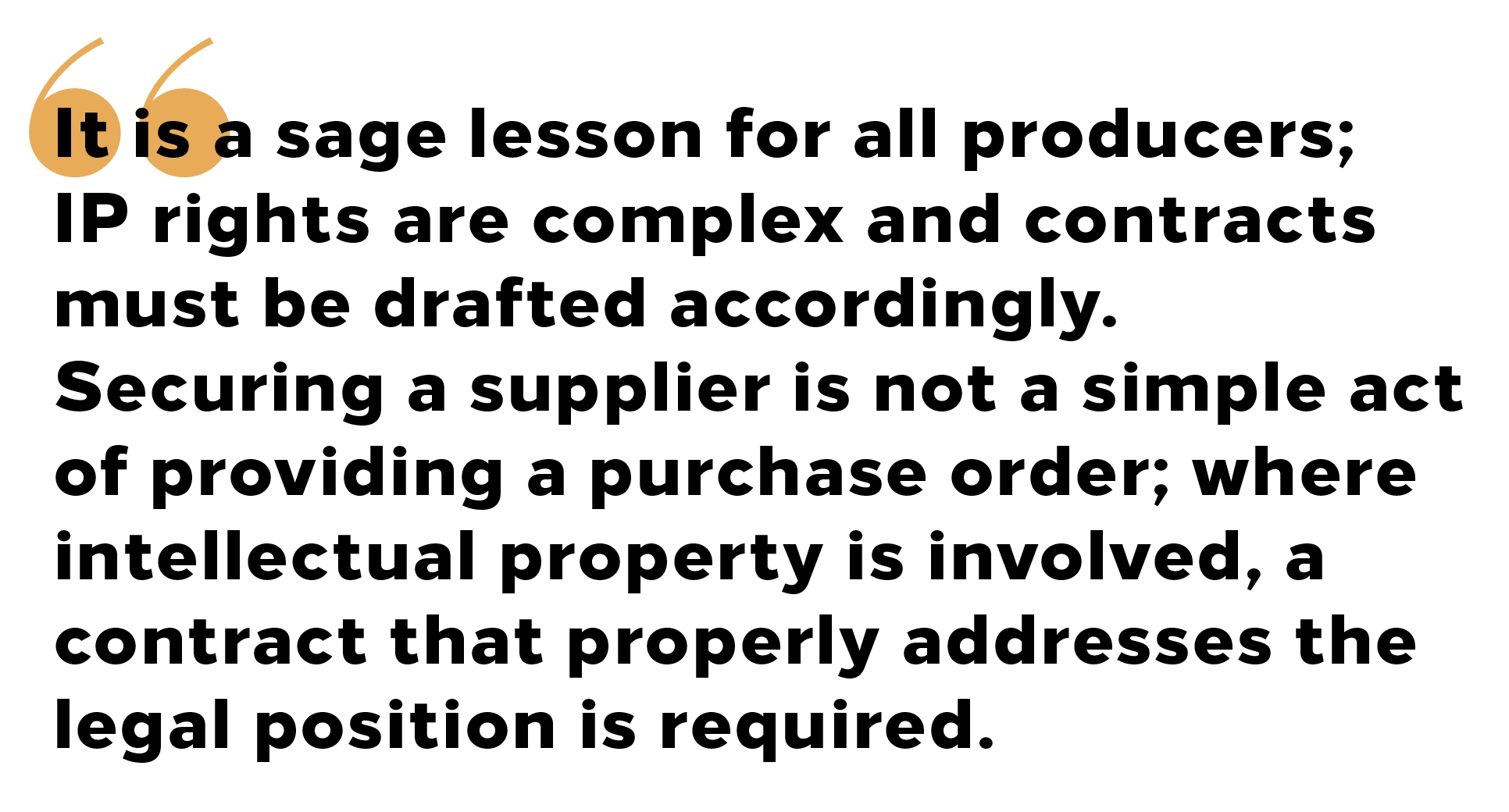 The Battlestar Galactica producers claimed that the elements of the storyline that had been allegedly stolen were, in fact, scenes that were universally applied within stories dating back over hundreds of years. On that basis, Fox could not claim any originality in the tale. At the essence of the argument: Star Wars had no rights of ownership over generic components of a storyline; those components were available for all producers to freely use.

The judge in the case at first instance was scathing about not just only about the case but the participants themselves, ruling that there was no substantial similarity. Fox appealed, and the Court of Appeal decided that there was a case to be heard and sent it back for trial. At this point, over four years later, the parties settled the matter out of court.

From this case, producers can learn to be wary of claiming copyright in matters that are generic in nature or which constitute standard scenes of drama and storyline. However, it is also important to note that the court was not decided – so beware of intentional copying of too much of any storyline!

Stormtroopers in a Tea Cup

Never were the laws relating to intellectual property more pushed and pulled than they were when Andrew Ainsworth decided to start selling Stormtrooper helmets to passionate Star Wars fans.

On the face of it, this should have been a straight case of rights infringement; making merchandise without a licence is not permitted and the iconic Stormtrooper helmets were certainly original and identifiable. When Ainsworth started selling Stormtrooper helmets some 20 years after the release of the original film, and made a very tidy profit from doing so, it was not unexpected that he found himself on the wrong end of the law.

However, the case was complicated by one fact: Mr. Ainsworth was the person that created the original moulds from which all Stormtrooper helmets were created for the original Star Wars trilogy. He charged Lucas a fee for all the helmets that he created from that mould. To make the matter more complex, the design of the Stormtrooper helmets themselves had, in fact, come from the Lucas team.

On the face of it, this case should have been resolved reasonably quickly. We naturally assume that Lucas, who was a diligent producer, had clearly set out the rights’ position in relation to the Stormtrooper helmets within the contract with Ainsworth. But the courts found that this was not the case. In addition, Ainsworth was a resident of the UK and Lucas decided to take action in courts in the USA. Lucas claimed damages of approximately US$20 million. However, the UK courts had no ability to enforce the judgment and so Lucas was forced to re-start his claim in the UK courts.

This is where things became incredibly complicated because Lucas was claiming ownership of rights under copyright laws of the UK but Ainsworth countered that the protection could only arise because of the operation of the design laws of the UK. The difference between these two is significant. Fundamentally, protection for copyright lasts for 80 years whilst protection for designs only last for 10 to 15 years.

If Ainsworth was successful in this assertion, Lucas no longer had the right to stop anybody (and particularly the man who owned the casts that created the masks) from selling Stormtrooper masks.

It would be safe to say that Lucas felt reasonably confident about his chances of success in this case. He had already won in the US. But as lawyers will always tell you, you must take into account the differences between jurisdictions when it comes to enforcing your rights.

Unfortunately for Lucas, the courts in the UK agreed with Ainsworth that this was not a copyright issue and that the design right, which the court agreed had existed, had expired. According to the courts, Ainsworth was able to sell Stormtrooper masks anywhere he wished and, given his link with the original production, had the right to claim that he was using the original mould whilst promoting those masks.

Lucas did not win this one; one can only imagine that his paperwork for future designs and copyright was carefully redrafted. It is a sage lesson for all producers; IP rights are complex and contracts must be drafted accordingly. Securing a supplier is not a simple act of providing a purchase order; where intellectual property is involved, a contract that properly addresses the legal position is required. When it comes to film creation and the magic of bringing that vision to life, very few things have captured the imagination in as much as the lightsaber. That wonderful combination of light and sound coupled with the ability to slash your opponent to pieces! Every stick in the hands of a young Jedi fan became a lightsaber.

A US company began selling unauthorised lightsabers emblazoned with the Star Wars trademarks and, as expected, Lucas took action to shut them down. At the time, Lucas stated that their goal was “to go after and shut down businesses that are trying to make a profit off of creations and properties that do not belong to them”.

When another company brought out a toy product that looked very similar to a lightsaber and was, shockingly, almost as dangerous as one it naturally caught the eye of Lucas. Interestingly, this version did not allude to Star Wars on any of the packaging. It was not called a lightsaber; there were no pictures from the movie or anything visually representing the movie on the packaging. There were no logos or branding that looked deceptively like a Star Wars logo. However, the shape of the weapon was reminiscent of the famous lightsaber from the movie series and in fact Lucas found a similarity in the handle and lodged its claim for copyright infringement. The company had to add wording to make it clear that the product was not linked to the franchise.

A further issue came to light when a New York brewery that had, for almost a decade, been making a small variety of beer known as buck which is called Strikes Buck. The brewery, which is located in the Empire State building, is called Empire Brewery and so the product became known as ‘The Empire Strikes Buck’.

So the marketing for the product continued without any issue until Lucas decided that the beer may cause confusion for consumers. Consumers may believe that the beer was a product associated with Lucas and the Star Wars franchise which, in the face of multiple branding exercises across numerous unusual product segments, was not entirely unreasonable. Once the Empire Brewing Company tried to register its trademark for ‘Empire Strikes Buck’, Lucas formally opposed the registration. Empire Brewing withdrew that application and has since successfully filed for ownership of the name ‘Strikes Buck’ on its own. So the force can still be with us, at least in some small bars in the state of New York.

The lesson here? You cannot win them all!

Lucas not only created a fictional representation of the universe that has captured the hearts, minds and souls of so many people around the world, he was also the originator of the business model that altered the way Hollywood and film studios globally made films, created stories, delivered icons, and exploited characters and other elements in order to maximise profit and exposure for his creative output. Protecting that revenue stream was, understandably, always a priority.

For young filmmakers and experienced filmmakers alike, it is educational to watch the legal manoeuvrings of those companies that have the time and resources to protect their rights in their creative outputs. Whilst the various legal cases concerning the Star Wars universe are entertaining in many respects, they are also a great way to remind producers that film production is in fact a business. Making sure that contracts are properly drafted to protect intellectual property rights is as important to a small filmmaker as it is to a large one.

May the force be with you!