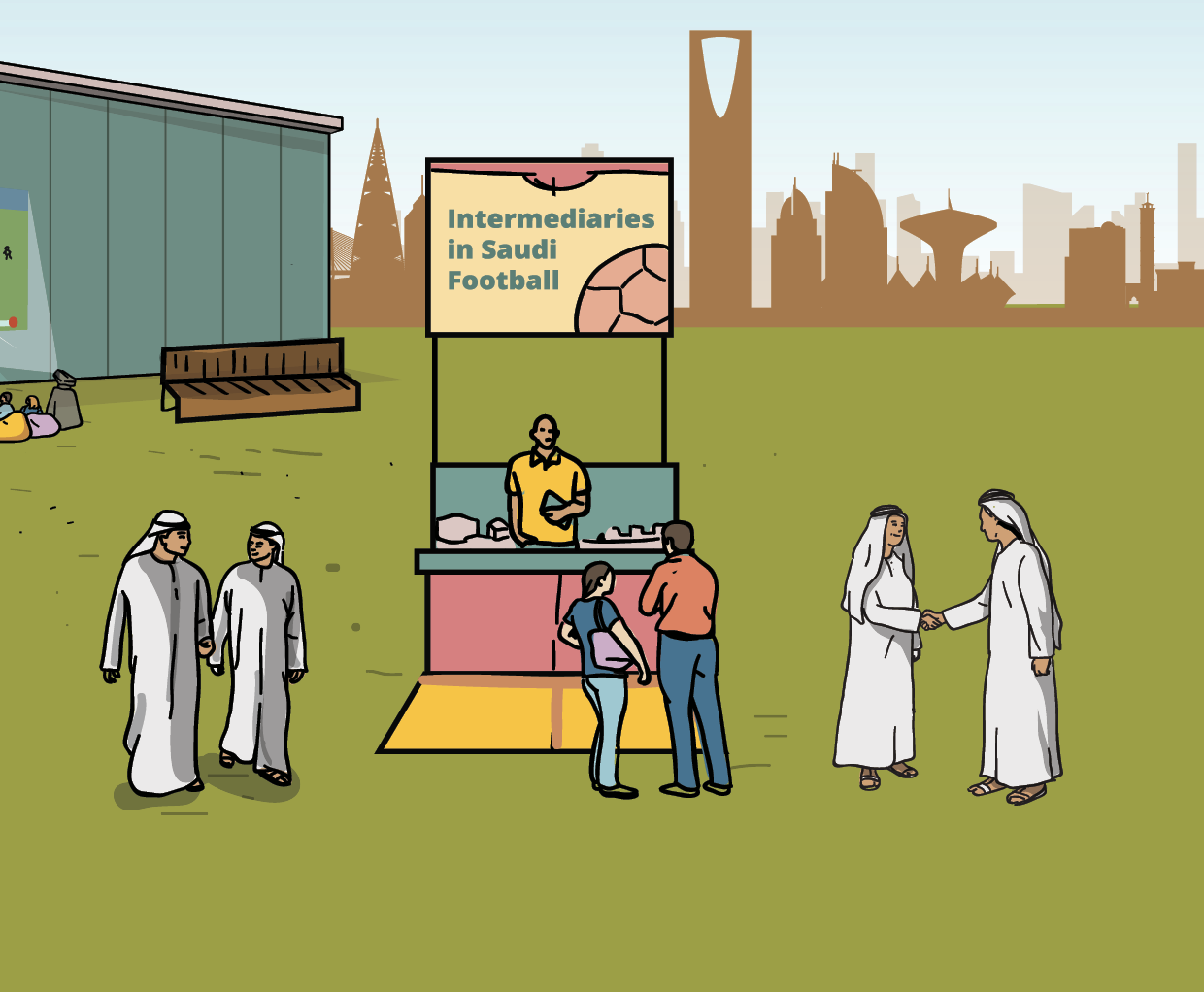 Intermediaries can have a profound impact on the transfer market in the world of football. Consequently, the Fédération Internationale de Football Association (‘FIFA’) has implemented the relevant regulations, namely the Regulations on Working with Intermediaries.

For FIFA, it is essential to protect both players and clubs from being involved in unethical and/or illegal practices and circumstances when negotiating transfers and employment contracts.

Accordingly, national football associations must comply with the minimum standards approved by FIFA, which includes those of the Saudi Arabian Football Federation (‘SAFF’).

SAFF was founded in 1956 and in the same year joined FIFA and the Asian Football Confederation (‘AFC’).

On 11 June 2014, the General Assembly of FIFA passed Resolution no. 64. This resolution replaced the ‘Regulation relating to Players Agents’ by a new ‘Regulation on Working with Intermediaries’ (‘RWI’).

The objective of RWI is to promote the relationship between intermediaries and players and/or clubs. It aims to regulate methods and principles of negotiation between the parties and sets out parties’ rights and obligations. RWI also allows SAFF to implement its own regulations that determine the procedures and methods to resolve disputes between clubs, players and intermediaries. Accordingly, RWI was adopted in Saudi Arabia pursuant to the Resolution no. 8400/Q/1 issued by the Executive Board of SAFF on 1, July 2015 as amended on 8 August 2017.

RWI in Saudi Arabia also deals with drafting and preparing employment contracts between football players and clubs, as well as preparing permanent transfers and loan agreements between clubs.

SAFF has adopted a similar approach to the FIFA Regulation as to the scope of the Principles and Definitions. The arrangements between players, their intermediaries and clubs are, according to Article 3 of the RWI, based on three key principles:

As indicated in Article 4 of RWI in Saudi Arabia, SAFF must keep a specific record for intermediaries which will be published. However, relevant parties must declare each time intermediaries are involved in any transaction. Football clubs and players who use intermediary services must submit the intermediary declaration and any other documents requested by the committee of professionalism and players’ status with SAFF in respect of each transaction. In addition, SAFF has the right to request any further information or documentation.

In order to be officially registered with SAFF, the intermediary must:

Pursuant to Article 5 of the RWI in Saudi Arabia, the intermediary must sign a declaration in a prescribed format. The complete application and declaration must then be submitted to SAFF.

The applicant is required to make certain declarations and must satisfy various other requirements including the following:

When a player and a club each want to use the services of the same intermediary for the purposes of the same transaction, the player and the club must give their express written consent prior to the start of the relevant negotiations, and shall confirm in writing which party (player and/or club) will remunerate the intermediary. The parties shall inform SAFF within 72 hours of any such agreement and accordingly submit all the aforementioned written documents within the registration.

Disclosure and Publication of Full Details

The requirements relating to disclosure and publication of payments to an intermediary are set in Article 8 of RWI. These are as follows: players and clubs are required to disclose to SAFF the full details of any and all agreed payments of whatsoever nature that they have made or that are to be made to an intermediary.

SAFF is required to disclose at the end of March of every calendar year, on its official website, the names of all intermediaries it has registered, details of transactions in which they were involved and the total amount of all remuneration or payments actually made to intermediaries by their registered players and by each of their clubs.

Article 9 of the RWI sets out particular requirements in relation to the remuneration arrangements for an intermediary in Saudi Arabia:

Type I – Player Representation
The total amount of remuneration due to an intermediary who represents the player in negotiation must not exceed 10 percent of the total value of the player’s contract.

Type II – Club Representation Whether Transfer Contract or Loan Contract
The total amount of remuneration due to an intermediary who represents a club in a negotiation of transfer or loan contract of player must not exceed 10 percent of the total value of the player’s contract.

The new regulations ensure that SAFF is obliged to publish accordingly and inform FIFA of any disciplinary sanctions taken against any intermediary. SAFF may impose a minimum of one or more sanctions such as a written warning, a financial penalty of no less than SAR 20,000 and not exceeding SAR 500,000 register suspensions, register holding or impose a ban on any football- related activity.

With the regulations outlined by FIFA establishing the relevant minimum standards, the business of intermediaries has suffered some changes over the years. RWI serves to promote the role of an intermediary and the contractual relationship between intermediaries, football players and clubs. Intermediaries compete with other intermediaries not only on a national level, but also on a global scale.

The implementation of RWI has been effective in reducing the financial burden on football clubs and preventing unlawful practices, especially by promoting transparency within national associations that regulate intermediates on a local level. Most importantly, RWI allows FIFA to monitor association members and check the continuous application of the relevant minimum standards.