Building for the future

This month we have a jam-packed magazine and dedicated marketing campaign, focusing on three areas; Family Business, Real Estate and Construction. We will take you on a journey that highlights how our focus areas are building for the future and the regulation being put in place that will help them get there. Here comes (more of) the sun: what will be lighting lamps in 2071

When it comes to energy, whilst global demand continues to grow, there is a clear trend that the way in which it is being used and generated is changing, with renewable energy having now become a viable alternative to conventional sources. With an increased focus on minimising carbon pollution and a desire by countries to reduce energy imports, governments and corporations globally have long term targets to reduce emissions, committing to raising the amount of renewable capacity and securing reliable and efficient supplies of energy. Energy transformation is at the forefront of many government policies and investment by companies into clean energy is paving the way for an accelerated transformation of the global energy system. This article looks at global trends emerging in the renewables energy sector including advances in artificial intelligence and storage solutions and also some of the challenges facing the sector as a whole. A further area this article will focus on is how the UAE has developed its policies towards global clean energy initiatives and the challenges it faces.

“When it comes to energy, whilst global demand continues to grow, there is a clear trend in that the way in which it is being used and manufactured is changing, with renewable energy rapidly becoming a viable alternative to conventional sources.”

In the early stage of development in advanced economies, new renewable energy technology, such as solar, wind, wave, biofuels, was a niche market due to the disproportionate production cost and need for subsidies. In 2021 much renewable energy technology has matured to provide competitive and/or cheaper alternatives to conventional power (e.g. solar). Given that the UAE was a late entrant to the renewable energy sector, having only entered within the last decade, it was able to benefit from the economies of scale and advancements made by countries such as China. The UAE was able to take advantage of these economies (as well as the low cost of financing) and develop its solar energy infrastructure without the need for state support. The ‘single buyer’ model deployed by UAE electricity procurers has led to a highly competitive market where world-beating low tariffs for solar projects have been regularly achieved in projects like the fifth and latest phase of the Mohammed Bin Rashid Solar Park and the Noor Abu Dhabi PV Power Plant (and recently bettered in Saudi Arabia for the Al-Faisaliah solar scheme). At the heart of the UAE government’s focus on renewable energy is the “Energy Plan 2050” which launched in 2017. This ambitious plan seeks to increase the contribution of clean energy in the total energy mix to 50 per cent and to increase consumption efficiency of individuals and corporates by 40 per cent. Ultimately, the goal of “Energy Plan 2050” is to create an energy mix that combines renewable, nuclear and clean energy sources to reduce the country’s carbon footprint and diversification of its economy away from fossil fuel. The UAE Centennial Plan is 21 years in the future to these goals so it is not unreasonable to expect further advancements after 2050. 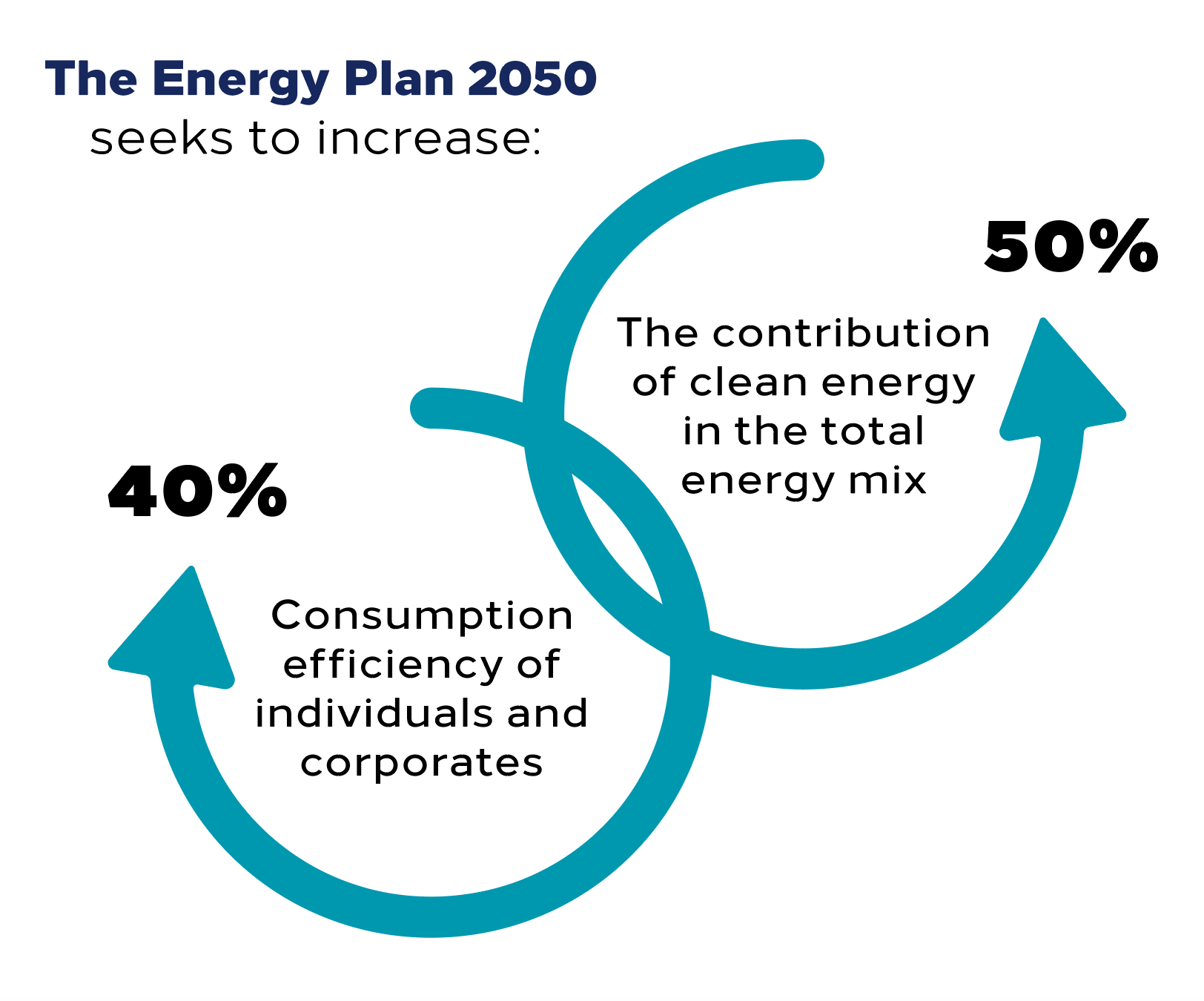 But whilst a full switch to renewable energy supply over the next 50 years is possible, this does not come without challenges. According to a report prepared by IRENA on Global Energy Transformation – A roadmap to 2050, some of the biggest challenges that the sector will face over the coming years include, storage and the speed of progress, public policy and regulation and the need to increase investment into smart energy systems, power grids and recharging infrastructure. Further, the impact of COVID-19 has temporarily diverted attention away from policies relating to renewable energy and resulted in labour shortages, national and international restrictions and disruptions to supply and manufacturing chains.

Given that context, what does reside in the UAE’s energy future? Three areas are of particular interest: storage; artificial intelligence; and green hydrogen.

When ice is slowly melting

Energy storage is the need to trap generated power pending its despatch to the grid at the required time. Storage technology has lagged generation to date but is key to addressing the need to balance the supply of energy from irregular natural sources with demand whilst ensuring a consistent and uninterrupted supply. According to a report prepared by IRENA on Utility-Scale Batteries, battery storage systems are emerging as one of the potential solutions to increase system flexibility as a result of their unique capability to quickly absorb, hold and reinject electricity. Further, with the rise of electric vehicles bringing lots more innovation in the battery space, declining costs of producing batteries and improved performance has meant that the demand for battery storage is at an all time high, particularly in countries such as Australia, Germany, Japan, United Kingdom, the United States and other European countries. For example, in 2020 Japan has completed one of its first large scale solar farms to meet the requirements of a local grid operator and the state of New South Wales announced the construction of four large battery projects aimed at modernising the state’s power grid by shifting to renewable sources of power supplemented by battery storage.

Regulatory and financial incentives are commonplace in these countries to encourage the deployment of battery storage solution. The incentives are particularly generous in countries that have energy stability concerns, such as Germany where government has provided levy and grid tariff exemptions to energy storage facility providers and low rate interest loans and in Italy where the government has offered 50 per cent deductions for storage installations. The UK government has also recently changed planning legislation to encourage the development of larger batteries to store renewable energy from solar and wind farms. This contrasts to the UAE where specific financial or regulatory incentives are not used to promote investments in grids (which are all state controlled) or storage solutions in the UAE.

However, the UAE has one of the highest solar irradiation levels in the world and we expect storage solutions will be increasingly deployed to manage the supply of energy as well as to meet the UAE’s clean energy targets set out in “Energy Plan 2050”. Typically, solar projects (typically PV) in the UAE have not had battery storage attached as part of their required design but the most recent Abu Dhabi project, the Noor project at Al Dhafra, has an optional large scale battery energy storage system with a capacity of 300MWh which, once completed, will be the first power plant in the region which integrates solar and storage. Further, as part of DEWA’s ‘Digital DEWA’ programme, testing energy storage technologies such as different batteries and energy from hydrogen is one of the key pillars of that programme. Therefore, an increased focus on battery storage in the UAE, coupled with greater private sector participation, is likely to continue to drive investments into large scale battery energy storage systems in the UAE.

The years since it’s been here

A further trend in the renewables’ energy market is the emergence of artificial intelligence to drive improvements in efficiency, quality and access but also in the planning, operation and control of power systems. Investment in artificial intelligence is poised to grow rapidly over the next fifty years with energy suppliers, including traditional firms such as Abu Dhabi National Oil Company, that has entered into a joint venture with an  Abu Dhabi-based AI and cloud computing company to develop AI products and applications for the oil and gas industry, noting the significant advantages that can be gained from investment in artificial intelligence. AI is to be used in the development of smart machines and advanced sensors to make more accurate weather predictions, the development of storage units based on understanding consumption patterns and monitor power demand to aid supply and demand. Dubai’s government, for example, is committed to artificial intelligence in the renewable energy sector. In an effort to achieve the objectives of the UAE Centennial 2071, and the focus on innovation, the Dubai Electricity and Water Authority has aligned its own goals with UAE Centennial 2071 and has revealed plans to build the world’s first autonomous renewable energy digital utility. The project will focus on the Plan’s four pillars to deliver a new utility experience and make Dubai a global model for clean energy and green economy. Of note is the third pillar, which will seek to use artificial intelligence to make Dubai the first city to provide AI-based electricity and water services.

However, the regulatory framework surrounding artificial intelligence will need to evolve in such a way as to balance the ethical need to control data against the practical consequences of applying artificial intelligence to analyse data so that renewable energy can work more efficiently. Whilst many developing nations have developed regulatory frameworks supporting data collection, arguably these still do not go far enough to protect specific uses of data. A notable example of existing legal frameworks that can control the use of data is the UK’s Data Protection Act and the EU’s GDPR. Currently the UAE does not have a single codified set of data protection laws and therefore the regulation of data protection will need close attention to support the growth of artificial intelligence.

Green hydrogen is effectively produced by renewable energy splitting water molecules into hydrogen and oxygen. One of its most important advantages is that it enables the storage of renewable energy in large quantities for a sustained period of time which increases energy flexibility and inter-seasonality issues. Moreover, it has the potential to overcome many difficult challenges of energy production such as producing hydrogen without CO2 emissions and/or polluting particles.

In the UAE green hydrogen initiatives are beginning in earnest. In 2021, ADNOC, Mubadala and ADQ formed the Abu Dhabi Hydrogen Alliance for the purpose of creating a green hydrogen economy in the UAE. Siemens Energy has announced plans to build a solar-powered green hydrogen plant in Masdar City and also entered into a MoU with Mubadala to produce green hydrogen. Looking regionally, the world’s largest green hydrogen project was unveiled earlier this year in the Kingdom of Saudi Arabia. The US$5 billion plant will use four gigawatts of renewable energy and is jointly owned by Air Products, Saudi Arabia’s ACWA Power and the corporate arm of NEOM, a mega-city planned in Saudi Arabia. The energy procurement frameworks both Federally and in the larger Emirates are sufficiently adaptable to allow for their adoption, provided the technology is as cost effective as solar has proven to be more recently.

Notwithstanding the challenges highlighted in this article, with clean energy at the top of every agenda in the UAE, the renewables’ energy sector within the UAE is most certainly poised to transform at a rapid pace over the next 50 years and in line with the industry trends highlighted. However, increased focus on the regulatory framework is required to ensure that the UAE can continue to keep up with the pace of energy transformation globally.