From Expo 2020 to Asian Cup 2019: Developing a protocol for dealing with Ambush Marketing in the GCC

The 1984 Olympic Games in Los Angeles are notable for several things. US Athlete Carl Lewis picked up an amazing 4 gold medals. The particularly 1980s pastime of wind surfing was included as a sport. It was the first time that organisers limited the number of sponsors that could be attached to the Olympic Games, arranging tiers of high value sponsorship and limiting sponsors to one per product category. Commercially, the Games were funded privately, and remains one of the few games to ever make a profit.

In addition, the 1984 Olympic Games recorded the first acknowledged case of ambush marketing when Kodak, then the world’s most popular film for cameras, lost the right to sponsor the Games to its rival Fuji Film. In retaliation, Kodak sponsored the US broadcast of the Games on NBC, and sponsored the entire US team. The vast majority of viewers of the games believed that Kodak was the sponsor, angering both the IOC and Fuji Film. Since then, organisers of sporting events and large scale commercial events (such as Expo 2020) have been seeking ways to ensure that companies that have no commercial sponsorship rights do not act in a way that leverages off the goodwill of the event in a way that devalues the benefits provided to the actual sponsors of that event.

Since the early days of ambush marketing, marketers have become extremely clever at developing ways for non-sponsoring brands to create false links to major events.

They may do this by attempting to create an association with the event itself. A very clever example of this, and one that was successful and remained unchallenged by the organisers because of its simplicity, was the association that Beats by Dr Dre headphones made with the 2012 London Games by providing free headphones to the British athletes. 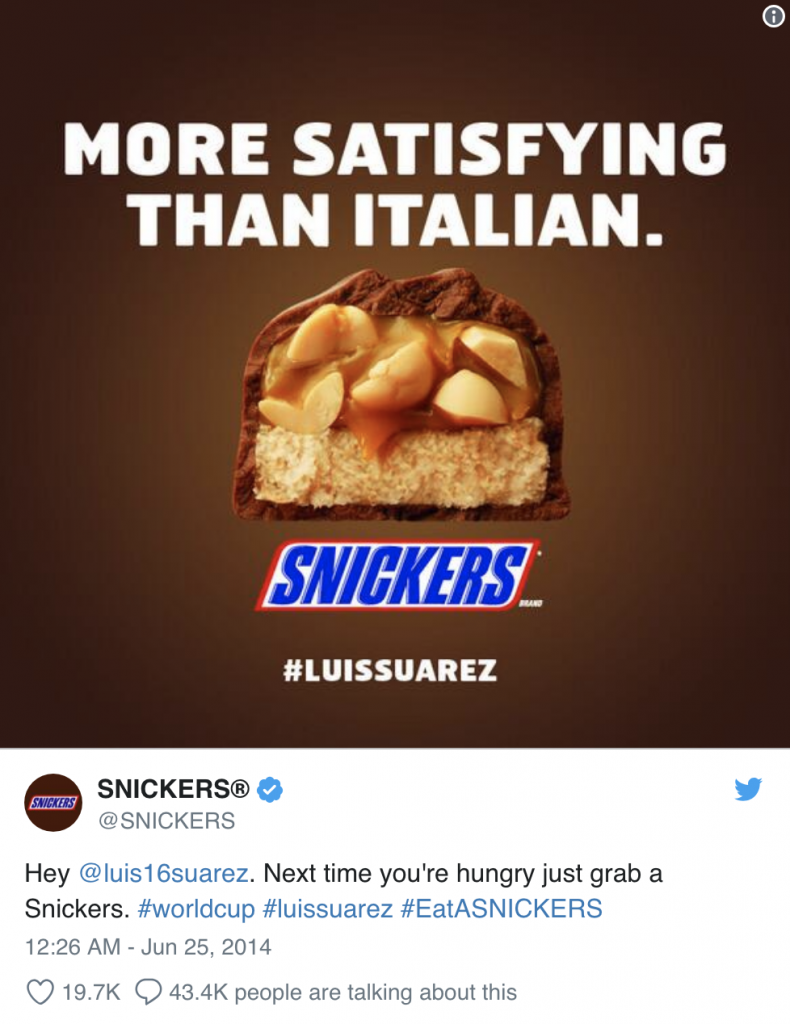 The other method is ambush by intrusion in this case the brand sends its brand into the stadiums of event locations and exposes it to cameras. Early amateur examples of this saw brands paying people to stand behind goals or near interview subjects with cardboard placards bearing the brand logo, although the levels of sophistication have escalated significantly since then.

Brands sometimes ‘coat-tail’ a marketing association. Whilst not event sponsors, they may sponsor a competitor or provide equipment to a key member of the team. Similar to this they may use distractive ambushing – they may set up a smaller event (such as a concert or DJ event) near the main event to gain traction with fans.

The Brazil 2014 World Cup saw the rise of a new and more difficult category of ambush marketing – the social ambush, involving the use of hashtags. Hashtags are often extremely opportunistic – happening within minutes of a notable occurrence at the event. For example, when Suarez bit an opponent in the 2014 World Cup, Snickers response was swift and went viral: “Hey @luis16suarez. Next time you’re hungry just grab a Snickers. #worldcup #luissuarez #EatASNICKERS”. With a staggering 672 million Tweets created for World Cup 2014, and with social media continuing to increase its role in marketing across the board, we can expect this difficult area of ambush marketing to become more prevalent for future events.

Some of these types of ambush marketing are more palatable to event organisers than others. Unfortunately not all are easy to control.

It has always been difficult for lawyers to find ways to deal with ambush marketing. In some cases, it can be claimed that the marketing campaign is infringing on the IP rights of either the event organiser or possibly even the official sponsor. There may be some assistance from competition laws, where they extend to passing off. Perhaps a little legal relief may be gained from the advertising regulations of the country in question – can it be perhaps argued that the advertising is deceptive in seeking to create a link with the event that does not exist?

Beyond this, the law becomes increasingly unhelpful.

Historically, the strongest way to deal with ambush marketing was to register a suite of trademarks and, then, using the trademarks legislation to bring action for infringement. However, this is increasingly less helpful as non-sponsoring brands become more adept at using subtle ways to imply a link to the event without the use of the trademarks involved. Clever marketing executives work with clever lawyers, and together they navigate a campaign idea though the many legal gaps.

Whilst some countries may be able to rely on their trade practices or competition laws, these will not be as helpful in the UAE. There are no ‘look and feel’ rights associated with an event, and no laws that say that a company cannot act in a way that compromises contractual rights of a third party. It is possible that the event organiser and the event sponsor would find that, legally, they have few (or no) options in a courtroom.

Because of this common gap in the laws, many countries implement event-specific laws to protect both the organisers and the event sponsors from ambush marketing. For example, for the Russian 2018 World Cup, the Russian government passed Federal Law No. FZ-108 in 2013. This follows the pathway set by past governments seeking to protect large events that are held in their countries – enacting laws designed to provide quick solutions to the problems of ambush marketing. Generally speaking, these laws create new offences relating to the creation of any unauthorised association with the event – for example the Russian law is drafted broadly and captures anything that might falsely suggests that the product has the approval, recommendation, certification by, or connection with FIFA or the World Cup. The laws include heavy fines which can be implemented by the government itself, bypassing the need for any civil case to be launched.

Without such laws in place well before the start of the event, the event organiser can expect to have a much more difficult time in preventing ambush marketing activities. But it is wise to remember that, even with such laws, an event organiser may struggle to stop an advertiser from, say, using a football game within its advertising during a World Cup, or referencing a world trade exhibition during an Expo.

Any entity with a large event approaching needs to strategise carefully its reaction to ambush marketing. Our suggestions include the following:

Whilst event sponsors are carefully planning and managing their marketing executions around the next big event, non-sponsor brands are similarly planning strategic and clever ambush marketing campaigns. Event organisers cannot do enough planning to ensure that the reactions taken to such ambush marketing are concise, controlled and consistent – to do anything else could severely compromise the position of their sponsors and affect these important contractual relationships.