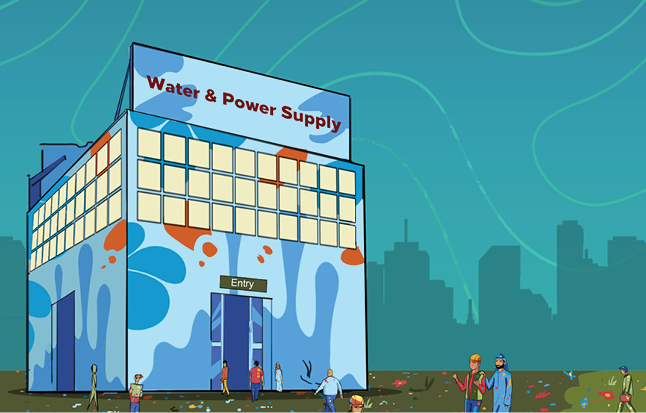 Historically, the UAE electricity sector was highly fragmented. This was due to power and water being controlled at an Emirate-level, rather than federal, in the largest Emirates though the various electricity and water agencies (EWEC (formerly ADWEA/ADWEC), DEWA and SEWA) with FEWA having the mandate for the remaining northern Emirates.

There have been a number of initiatives or practical developments that have reduced the siloed nature of this UAE market in the last decade. For example, the plan for the Emirates National Grid to connect the four separate systems was announced by the UAE Government in 2013. Abu Dhabi has become a significant supplier of electricity to the northern Emirates. In 2018, Abu Dhabi and Dubai entered into a memorandum of understanding to study water connection between the two Emirates. In February, Abu Dhabi Power Corporation offered to merge its power and water assets with Taqa to create an AED 200 billion electricity behemoth. 2018 and 2019 heralded significant legislative change that was set to underpin the next stage of development.

The Emirates Water and Electricity Company was incorporated under Law No. 20 of 2018 (the ‘EWEC Law’) as a replacement for the Abu Dhabi Water and Electricity Company (originally established by the Water and Electricity Law, Law No. 2 of 1998). Also in 2018, the Department of Energy of the Government of the Emirate of Abu Dhabi (the ‘DOE’) was formed pursuant to Abu Dhabi Law no. 11 of 2018 (the ‘DOE Establishment Law’) the purpose of which was to replace ADWEA and its regulatory responsibilities and the Regulation and Supervision Bureau (the ‘RSB’) with the DOE. This was then followed in early 2019 by changes to the role of Abu Dhabi Power Corporation (‘AD Power’).

As a result of these changes, the new regulatory framework introduced by the DOE Establishment Law, the EWEC Law and the AD Power amendment law had the following impact:

The restructuring has had the key benefit of separating and transferring the commercial and regulatory aspects of the electricity and water sector that rested with ADWEA to AD Power and the DOE respectively. ADWEA was a public authority directly owned by the government; AD Power is a government corporation and owned by Abu Dhabi Development Holding Company. ADWEA’s role was corporate insofar as it owned AD Power and had the power to form subsidiaries but, had public responsibilities insofar as its objectives were to promote conservation, research, the provision of public information in respect of the water and electricity sectors. However, AD Power’s objectives under law are purely corporate (e.g. to invest in projects, establish subsidiaries, and provide security, etc.).

For EWEC, the restructuring led to an enhanced role reflecting the trend of greater integration in the UAE power and water markets. Under the EWEC Law its role is to act as the sole provider for production of water and electricity in a geographical scope to be determined by Abu Dhabi’s Executive Council. This contrasts with ADWEC which was only statutorily responsible for Abu Dhabi. EWEC’s changed geographical scope was explained by public announcements from EWEC that it would be responsible for the procurement of water and electricity in Abu Dhabi and the Northern Emirates. This requires arrangements to be made with FEWA as the federal agency for electricity and water (media reports state that these discussions are underway).

More than a dozen projects have been completed since the introduction of the 1998 Water and Electricity Law. The Abu Dhabi IPP/IWP programme was a notable example of a successful private sector participation programme and influenced other Emirates to follow its model. The well ‘road-tested’ regime made each new project a more certain undertaking as the transaction documents and legal framework had been banked numerous times. Understanding the impact of the legislative changes to new projects was of particular importance in 2019 as numerous projects were in process. EWEC awarded one water project (Taweelah IWP) and invited bids for two more (Fujairah F3 IPP and Al Dhafra Solar IPP).

A reading of the EWEC, DOE and AD Power laws together indicates that there is no intention to change the risk being assumed by developers and lenders involved or bidding for an Abu Dhabi IPP or IWP. However, these laws need to be overlaid with the original 1998 law as the DOE Law only repealed it to the extent there was contrary provision. Parties interested in the 2019 projects wanted to ensure that the new laws effectively transferred the assets, rights and obligations of the old entities to the new, that powers of the new entities were aligned with the old regime, which of the new entities would provide consents and approvals and that the laws duly authorised the new entities to perform their replacement roles. The successful closing of Taweelah in October 2019 and bid demand for the Fujairah F3 IPP and Al Dhafra Solar IPP seemed to be strong endorsements that the statutory changes did not adversely impact the attractiveness of an Abu Dhabi project to the private sector.

In September 2019, the Climate and Environment Minister of the UAE Government, Dr Thani bin Ahmed Al Zeyoudi, announced, at the United Nation’s Climate Action Summit in New York, a target of 50 per cent clean energy by 2050 for the UAE. It is proposed this would be made up of 44 per cent from renewables and six per cent from nuclear. The Dubai Government has its own goal of 75 per cent clean energy by 2050. The achievement of these goals, both laudable and ambitious, will necessitate coordination between the Emirate and Federal governments and their agencies. Accordingly, we anticipate the further reduction of market barriers and integration of the power and water sector in the years to come.