N.B. This article was first published on the Kluwer Arbitration Blog on 6 June 2019. 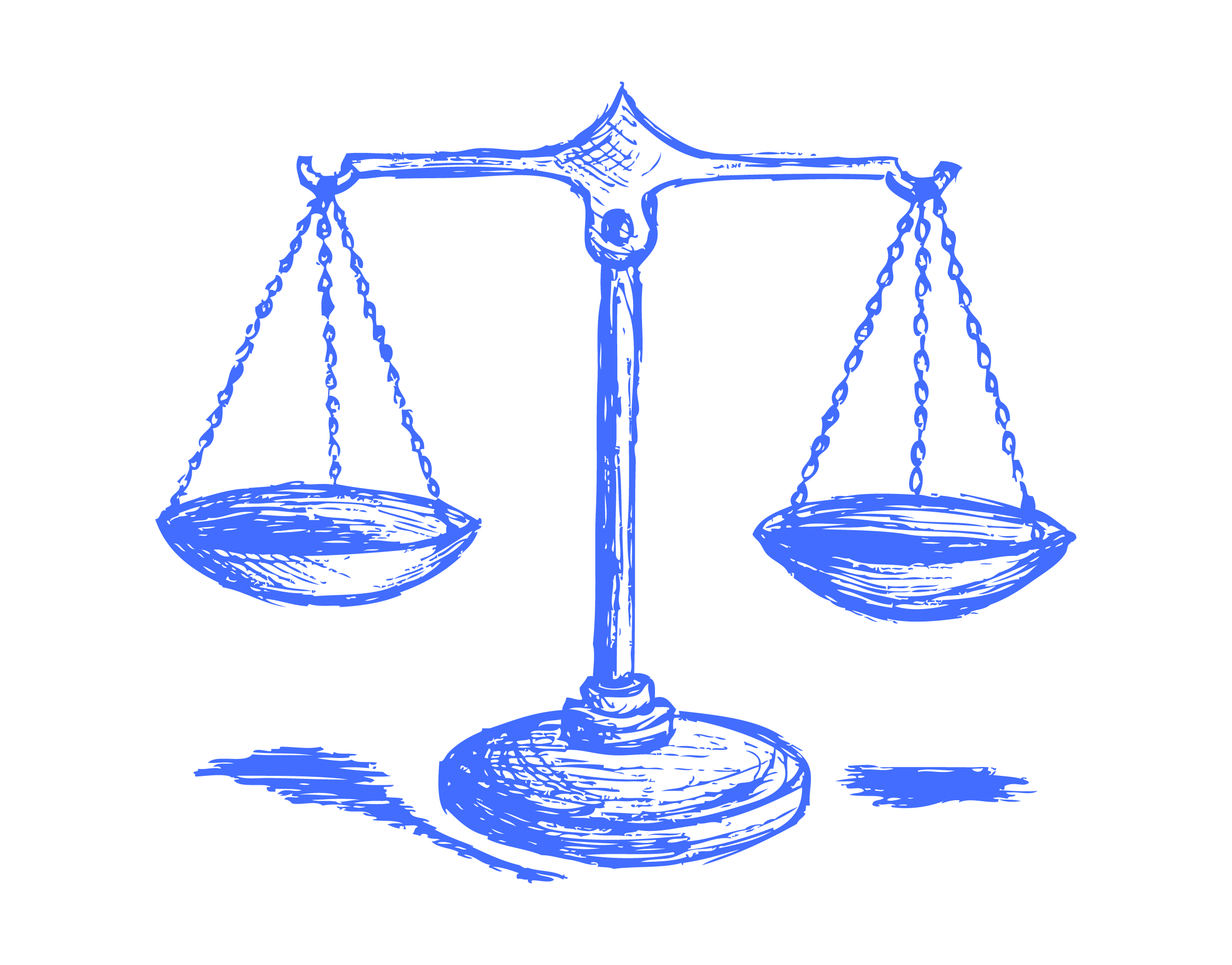 The Dubai International Arbitration Centre (‘DIAC’) is a regional arbitration centre created by a statute in 1994 as part of the Dubai Chamber of Commerce and Industry (the ‘Chamber’).

On 23 April 2019, the Ruler of Dubai issued Decree No. 17 of 2019 approving a new statute for DIAC (the ‘New DIAC Statute’). The New DIAC Statute replaced the previous DIAC statute on 2 May 2019, the day of publishing the Decree in the Official Gazette.

Unlike the proposed changes to the DIAC Rules, which have been widely circulated in draft form, no proposed changes to the previous DIAC statute were circulated prior to its enactment as far as the authors of this article are aware. However, there are important changes recorded in the New DIAC Statute and this brief article highlights some of these provisions, specifically with regard to DIAC’s structure, the functions and authority of the relevant bodies, and the recorded process for implementing the long-awaited new DIAC arbitration rules.

According to Article 6 of the New DIAC Statute, DIAC consists of a Board of Trustees (the ‘BoT’), an Executive Committee (the ‘EC’), and an Administrative Body. Article 2(B) of the New DIAC Statute states that DIAC “shall enjoy full independence in the provisions of its services for settling disputes through arbitration or conciliation.” However, upon perusing the New DIAC Statute and for the reasons set out below, it is apparent that the Chamber’s Board of Directors appoints the BoT, and that the structure of DIAC is as follows: 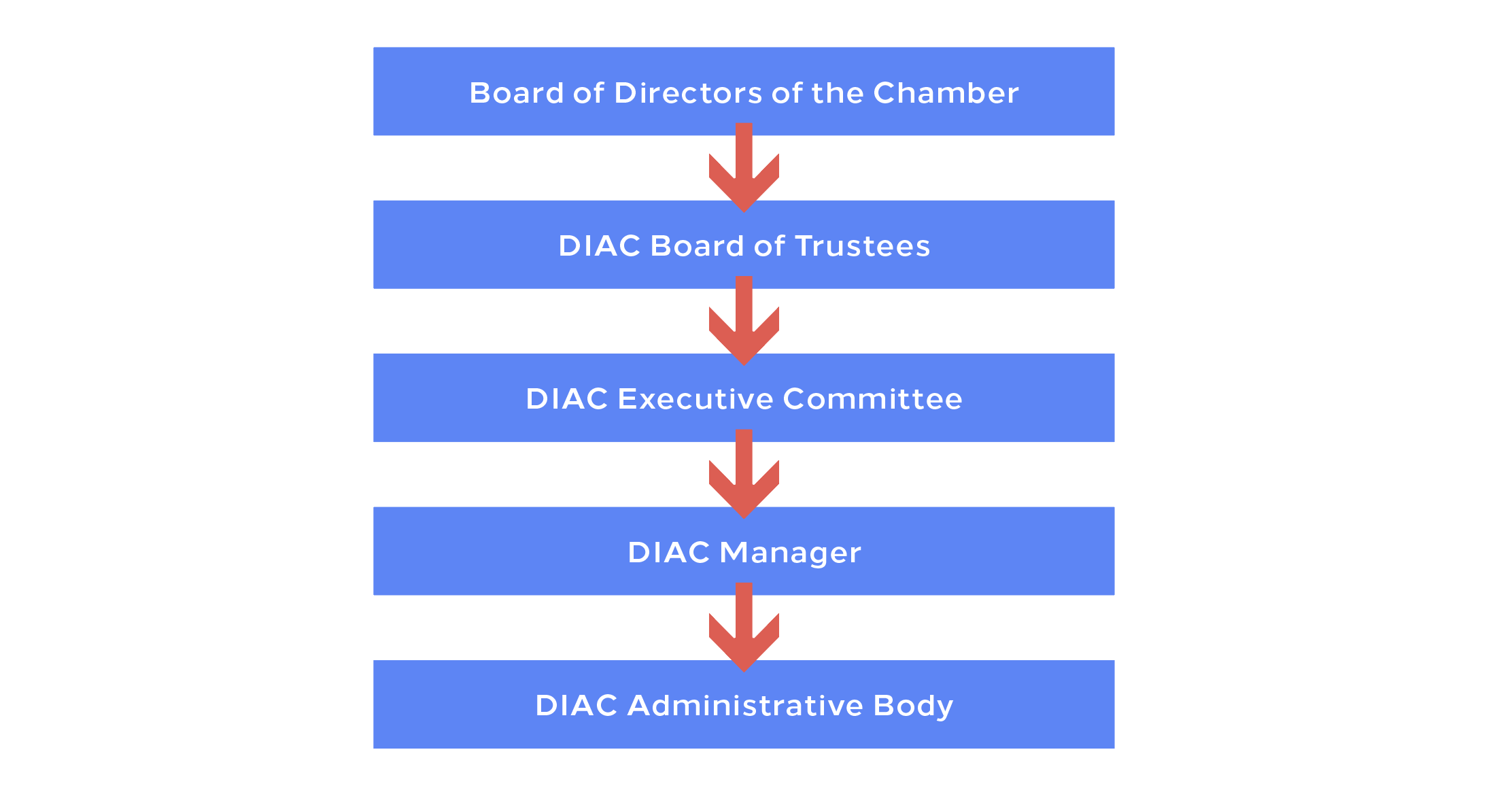 Accordingly, based on the contents of the New DIAC Statute, the level of actual independence of DIAC vis-à-vis the Chamber is, arguably, not as apparent as it was under the previous DIAC statute, and DIAC will need to take care to ensure its independence is maintained and seen to be maintained.

A. Board of Directors of the Chamber

The only noteworthy reference to the Chamber in the previous DIAC statute simply recorded the fact that DIAC forms part of the Chamber. According to the New DIAC Statute, however, the role of the Chamber’s Board of Directors (the ‘BoD’) at DIAC is presently indispensable, for example:

The examples above make evident the BoD’s fundamental role, pursuant to the New DIAC Statute, in appointing DIAC’s senior management, overseeing DIAC’s structure and operations, and implementing any important changes. However, we understand that the BoD does not have any involvement in the handling of cases, which remains with DIAC.

B. Board of Trustees

The BoT is the governing body carrying out the overall responsibility for the management of DIAC.

Furthermore, the New DIAC Statute contains a particularised list of the BoT’s functions, for example:

However, as mentioned in the previous section, the BoT’s functions set out in the New DIAC Statute are generally subject to the approval of the BoD.

The EC assists with implementing the BoT’s decisions and carries out various functions assigned to it in the DIAC Rules. The EC consists of at least five members, including the EC’s chairperson and vice-chairperson, who are appointed by the BoT chairperson after consulting the members of the BoT.

The BoT also has authority to form and delegate certain EC duties and powers to the EC’s sub-committees.

The Manager, as the job title suggests, is responsible for controlling and administering DIAC and its Administrative Body. In the previous DIAC statute, the Manager was called a Director. To the authors’ best knowledge, since the departure of the former Director in August 2013, the position of Director (now Manager) has been vacant.

Under the previous DIAC statute, the Director could be appointed by the BoT. However, the New DIAC Statute prescribes that the Manager may be nominated by the BoT and then ultimately appointed by a BoD resolution.

The Administrative Body is the body responsible for ensuring that the services provided by DIAC and the arbitration proceedings between parties are running in a smooth and effective manner and, more importantly, in accordance with the DIAC Rules. The Administrative Body, comprising case management and other administrative staff, is supervised by the Manager.

One peculiar feature to note about the DIAC Rules is that they were issued by Decree No. 11 of 2007. Thus, in order to introduce a new set of DIAC arbitration rules, it is necessary for the Ruler to issue a new Decree.

The current DIAC Rules have been in force for more than 12 years. Despite the “Launch and Discussion of the New 2018 Arbitration Rules” during the Dubai Arbitration Week in November 2017 (approximately 18 months ago) and the subsequent flurry of articles and analysis based on various drafts of the new DIAC arbitration rules, the new rules are yet to see the light of day. 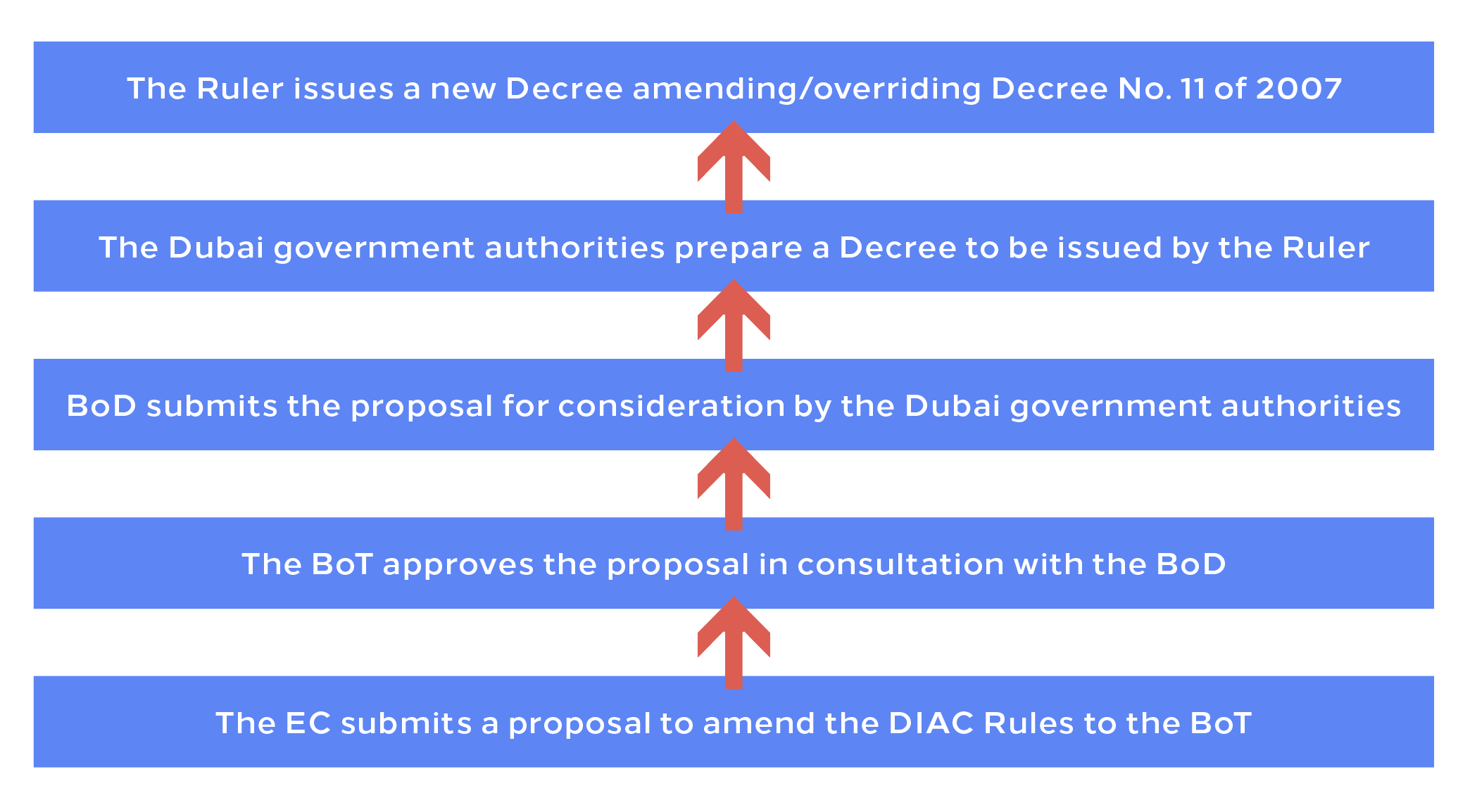 The UAE Federal Law No. 6 of 2018 on Arbitration introduced significant changes to the UAE’s arbitration law. More specifically, under Article 10(2), the previously mentioned law provides qualifications required for arbitrators, which provides the following:

“The arbitrator cannot be on the board of trustees or the administrative body of the Arbitration Institution responsible for administering the Arbitration in the State.”

Accordingly, the DIAC Statute seconds the above-mentioned provision in Article 23 dealing with the ‘Appointment in Arbitral Tribunal’, which states the following:

Overall, the New DIAC Statute is a more comprehensive document than the previous DIAC statute, which may suggest it is a preparative step to the issuance of the long-awaited new DIAC arbitration rules by Decree of the Ruler. It is difficult to say how important the involvement of the BoD will be on the functioning of DIAC – it may be a tectonic shift in the oversight and control of DIAC in favour of the Chamber; or simply a reflection of the changes at DIAC over the last decade such that no change in DIAC’s functioning will be noticed. In any event, DIAC will need to ensure that it maintains its independence if it is going to keep its position as the most used arbitral institution in the region.