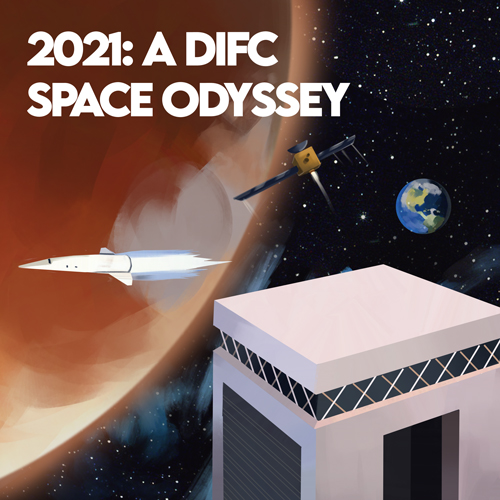 In 2017 the Courts of the Future was ‘launched’ by the DIFC Courts and the Dubai Future Foundation with a mandate to “explore diverse legal technology topic areas and to provide research and thought leadership on promoting and encouraging contemporary methods of greater accessibility and efficiency to court users across the globe.”

Since 2019, the UAE has found itself at the forefront of space exploration with Hazzaa al-Mansoori having launched for the International Space Station in September 2019, becoming the first Emirati astronaut. Then in July 2020, the UAE launched the Hope Probe on a seven-month journey to Mars, carrying state-of-the-art science instruments designed to study different aspects of the Martian Atmosphere. Hope completed its journey in February 2021 and has been sending back images of the red planet ever since.

Zaki Azmi, Chief Justice of the DIFC Courts, has said that “An integrated space industry, supported by human resources, infrastructure, and scientific research, is under way. The Courts of Space is a global initiative that will operate in parallel, helping to build a new judicial support network to serve the stringent commercial demands of international space exploration in the 21st century. As space commerce becomes ever more global and countries ever more connected, diverse, and nimble economies will need to enable growth. Complex commercial agreements will also require an equally innovative judicial system to keep pace, offering assurance and certainty to support and protect businesses.”

His Excellency Khalfan Belhoul, CEO of the Dubai Future Foundation, has said “Our partnership with the DIFC Courts on the Courts of Space initiative marks yet another step in the UAE’s efforts to expand its nascent space sector. And as part of our mandate at the Foundation, we are committed to exploring and forecasting future trends, testing innovative technologies and if needed, introducing new legislations and develop existing ones to support our drive in becoming the leading city of the future, and strengthening Dubai’s position as a knowledge-based economy.”

In what might be described as warp-speed progress, the Courts of Space have since announced, in April 2021, a working group to explore space-related legal innovations to provide “an outlook on potential outcomes of scenarios revolving around space-related disputes.” The working group consists of members of international space agencies, leading academics in space as well as law, the Chief Registrar of the DIFC Courts and is complemented by observers from The United Nations Office for Outer Space Affairs (‘UNOOSA’).

Additionally, the working group is said to be tasked with the creation of a Space Dispute Guide, encompassing a set of guidelines to support such space-related disputes, as well as a parallel objective which will involve the training of judges to become space-related dispute experts after having received courses on space regulations by international bodies and regional agencies.

Amna Al Owais, Chief Registrar of the DIFC Courts, said: “For the time being, the Working Group will discuss more current space dispute issues such as equipment failures, space cargo disputes, or even failure to deliver components on time. It might include substandard materials or design faults… lunar exploration and space resources activity are likely to become more concentrated in the coming years, as well as space tourism and exploration. Space courts would be called upon to adjudicate on responsibility, damages, and liabilities, as is the case with any commercial dispute.””

UNOOSA describes space law as the body of law governing space-related activities which includes “the preservation of the space and Earth environment, liability for damages caused by space objects, the settlement of disputes, the rescue of astronauts, the sharing of information about potential dangers in outer space, the use of space-related technologies, and international cooperation.”

There are five United Nations treaties on outer space, beginning with the Outer Space Treaty which came into force in 1967. This was followed by the Rescue Agreement (1968), the Liability Convention (1972), the Registration Convention (1976) and the Moon Agreement (1984). As at January 2020, the UAE had ratified all but the Moon Agreement, and had ratified a further four Agreements including the International Telecommunication Constitution and Convention which came into force in 1994.

The UAE has considerably increased its scientific capacity and demonstrated its capabilities since the launch of the Hope Probe and will continue to capitalise on the success of that project. Further growth in the UAE’s space sector is only going to increase in the coming years. Indeed, in April 2021 the UAE doubled the size of its astronaut programme, appointing two additional astronauts out of over 4000 applicants. One of those, Nora AlMatrooshi, hopes to become the first female Arab astronaut into space.

As its capabilities increase and a UAE space industry develops, whether in exploration or space tourism, it must be supported by robust legal support, in the form of the Space Courts, the judges of which are trained and experienced in the application of space law.

Space law itself is nothing new of course, as the Chief Justice has said, but “an important next step will be for the Courts of Space initiative to develop and establish the DIFC Courts as a commercial go-to court for these matters. This is a complex and tall order, but it is well within Dubai’s reach as the UAE develops its own spacefaring ambitions and becomes one of very few countries on this planet to have reached Mars.””

The DIFC Courts are ideally placed to develop the expertise required to support the rapidly growing UAE space industry. The Courts already have vast experience in dealing with international law, in the context of complex commercial, financial and technology disputes. As the Courts of Space working group integrates into the DIFC legal environment, the ability of the DIFC Courts to handle matters involving space related issues will undoubtedly evolve.